Not So Bad After All: Judas Priest's Ram it Down 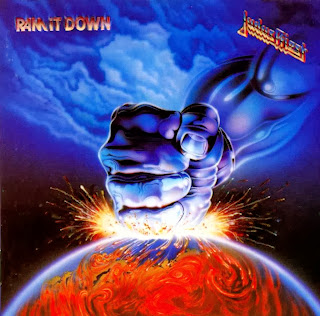 It's funny how taste can unpredictably change over the course of a few months. As an example, Ram it Down has grown on me immensely, to the point that I place it favorably in Judas Priest's eighties discography. Prior pieces on this blog indicate that I prefer the band's seventies output to any other period in their 30+ year existence and, while that's true, I'm starting to enjoy their later work as well, simplicity and all. There's a certain charm about it, if you get my drift.

My guess is that it all started when I snagged a well-worn, but very playable, copy of Ram it Down on vinyl from an antique mall. It was one of those things that had me saying, "Why the hell not? It's cheap!" One might call my find an impulse buy, but with used vinyl, I give the record a careful once-over before taking the plunge in order to determine if it will play smoothly or not.

That's how the story goes, anyway, because I spun my newly acquired vinyl a handful of times before setting it aside for a few months. It wasn't until I made the effort to digitally archive the release that I started to come around because I could literally take the music with me anywhere--the most frequent place, without question, was on my daily runs where the title track got me up and going. 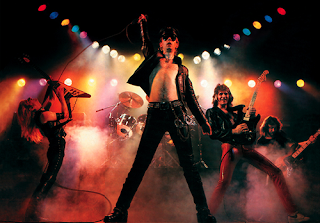 Now, don't get me wrong: Ram it Down still has remnants of the previous album's (Turbo) pop in its sound, but that's expected, considering it was the follow up to the pussy-whipped opus. I often find myself curiously thinking about what it was like to be a Priest fan when Turbo hit shelves, too. One look at Halford's newly slicked-back hair probably told all in those days--and I'm not referring to his sexuality.

Naturally, Turbo isn't Priest's best moment, either, but it more or less had a positive impact on Ram it Down because the music is fun, catchy, and accessible. But, unlike Turbo, Ram it Down is generally quality, baring a few glaring exceptions that nearly kill it for me. Yes, the last three tracks are absolute tripe.

The remainder, however, is decent to above average, with the title track, "Heavy Metal," and "Come and Get it" sitting at the top. It's hard to believe this was the record released just before Painkiller, which was a wonderfully vicious assault only two years later. Boy, how things can change over a short period of time. Oh, wait. That's why I wrote this post in the first place.