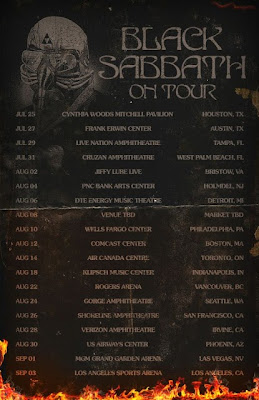 With the smell of weed high in the air, I watched Black Sabbath on what would likely be their last tour. All things considered, they sounded fantastic--though I would have preferred Dio at the helm--and Ozzy largely defied years of drug and alcohol abuse by running, jumping, and throwing massive buckets of water into the audience. Was I satisfied? You bet. Was I completely happy? Well, not quite.

To be honest, it all goes back to Dio. Note-for-note, song-for-song, comparing 13 with The Devil You Know puts into perspective the cash grab Sabbath's latest album and tour present after Ozzy's debacle with Iommi. How could two people amicably settle such a serious issue as if nothing happened at all? And why would they tour?

Today, with Osbourne as frontman, Black Sabbath's material feels like a synthetic experience and, live, Ozzy appears to be going through the motions, saying the same things over and over:

"Let me see your hands!"

"I can't fucking hear you!"

Admittedly, those are among standard concert lingo, but he said little else and very few times did he introduce the songs during breaks. You might argue that that was Black fucking Sabbath last night, and that the music needed no introduction. And you'd be correct. But with someone of Ozzy's notoriety and experience as an entertainer, I don't think it's unreasonable to expect more. 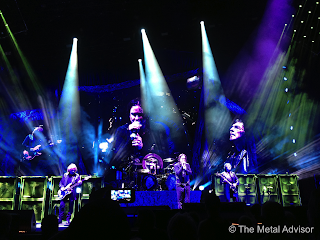 That being said, I made my way over to Klipsch Music Center to see Iommi and Butler, not a has-been and his fill-in drummer. In the grand scheme of things, it didn't really matter what the rest of the band sounded like as long as those two fulfilled expectations. And they did, of course, because 1) Iommi is a living legend and 2) seeing Butler live is something every metalhead needs to be able to cross off the bucket list at least once.

Happily, the two took their craft seriously; and even in light of his recent health issues, Iommi appeared to be having a good time. Setting the venue ablaze with each guitar solo, he looked overjoyed that he could still play to sold-out crowds of nearly 24,000 people. Likewise, Klipsch was teeming with fans of all ages--so many that, at one point, I thought I wasn't going to make it out alive with the heat and stampede of people to the front.

But I did survive long enough to see Sabbath over a 16-song set. They couldn't have picked a better number to open the gig with, either, as "War Pigs" is perhaps in the top three best-known tracks from their discography and a golden oldie at that. The following cuts, "Into the Void," "Under the Sun/Every Day Comes and Goes," and "Snowblind," all tied-in perfectly with the vibe, too. 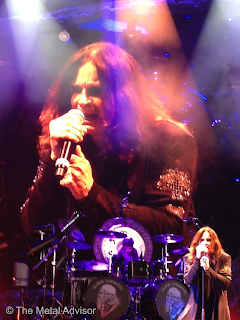 "Age of Reason" came next, and this is where the concert began to grow tiresome. Ozzy was exceeding my expectations because, for the most part, his performance was similar to the new material's studio recordings, but everything from 13 seemed as if the same song had been placed on constant loop when played live. If not for the plodding pace and monotonous vocals, the music might have translated differently.

Sabbath seemed to know that and, as a result, switched back to a spirited round of classics--"Black Sabbath," "Behind the Wall of Sleep," "N.I.B. (led by Butler's excellent bass solo)," "Fairies Wear Boots," and "Rat Salad--but inserted "End of the Beginning" between "N.I.B." and "Fairies Wear Boots."

Of course, there were a few surprises as well, when everyone, save for Clufetos, stepped off stage in preparation for his drum solo. This was the part of the night I appreciated most because, although Ward was absent from the line-up, Clufetos was fairly true to the original studio recordings. His drum solo, a nearly 10-minute affair, was an opportunity to show off his chops and break free of being relatively unknown--something I can certainly stand behind.

Sabbath couldn't go long without a classic, however, and made their reentrance with "Iron Man," which, along with "Paranoid," is indisputably their most popular song. The single from 13, "God is Dead?," entered the rotation next, garnering an overwhelming response from fans and was undoubtedly one of the favorites.

Taken from 1976's Technical Ecstasy, "Dirty Women" followed, but found itself eclipsed by vintage rocker "Children of the Grave," which stands as one of my favorite Black Sabbath tracks. Right at this moment, the concert was worth its weight in gold, if only for that song; closing the show with "Sabbath Bloody Sabbath's" intro and "Paranoid" was like icing on the proverbial cake. 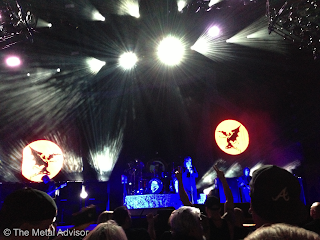 Similarly, there were times when I really enjoyed myself last night. Nearly everything from 13 fell flat on its face in terms of pulling an emotional response from me, but the classic material, specifically "Children of the Grave," felt great to see live, even though Sabbath weren't what they once were.

I might be slightly irked with the concert for the reasons listed above, but I'm also very happy that I finally saw Iommi and Butler in a live setting. Despite the tour being a thinly-veiled cash grab, Black Sabbath still have a passion for music and, as older metal bands begin to call it a day, are not an opportunity to be missed. There are seven North American dates left. Better see them while you can, don't you think?