Black and Colored Vinyl: A Study with Cold Blue Mountain 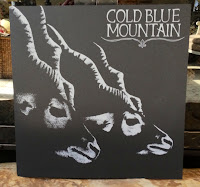 Nine times out of 10 colored records produce poor sound quality. I've ranted about the downfalls in the past, but the average listener is unlikely to notice the slight sonic differences, if I'm being honest with myself. My biggest beef with colored vinyl is that these releases aren't subject to the same manufacturing processes as their black brethren and often emit irritating fuzziness as surface noise mixes with music.

Recycled materials affect sound regardless of color. Black, purple, picture disk--the appearance really doesn't matter because a turntable needle will quickly break down shoddy material in place of the strong base found in well-made records. Reprocessing PVC isn't the best option--particularly for delicate audio reproduction--and affects the medium's purity, speaking strictly on the subject of playback. On paper, a piece of wax culled from the rainbow's palette can theoretically sound better than a release pressed in black. Unfortunately, the situation is usually the other way around, with colored records receiving the short end of the stick as black vinyl retains the tried-and-true formula mastered after decades of development.

But back to my main point: colored vinyl, more often than not, sounds worse than the standard that has dominated the industry for years. Since I slapped my first record on the turntable, I've preached the benefits of sticking solely with black, even if it doesn't look as pretty. In my experience, colored variants seem to break down faster, suffering sonically after each play and typically only last a handful of spins before a discernible difference in quality can be heard. A number of factors are at work, particularly if the turntable's needle is not in proper order, or if exceptionally revealing speakers are used during playback. Provided the audio chain is kink-free, then the pressing quality matters most because other pigments generally aren't as resilient. Colored wax can sound as good as a black piece, but the industry, as a whole, has no desire to develop an improved formula because these records fill their role as collector's pieces (re: a fallback), if the standard pressing doesn't sell well.


Naturally, I was skeptical when two variants of Cold Blue Mountain's self-titled debut fell in my lap, but I silently noted the blue/white eye candy as soon as I pulled it from its slipcase. Both records are identical in terms of packaging and include a poster, as well as a download card to redeem a digital copy of the music from Bandcamp. As far as I know, the colored piece is limited to 100 copies, while the black is a little more common at 200. Had I not received the blue/white combination as a generous gift, I probably wouldn't have added it to my collection in the first place--and I'd be blissfully unaware of the best-sounding colored record I've been fortunate enough to hear.

Comparing these releases wasn't as simple as clicking a back button. Relying on memory is the best I can do and, amazingly, my impressions will make turning the other cheek on colored vinyl a substantially tougher proposition next time I visit a decent music store. I was shocked to find the colored piece quieter, composed, and crisper than the black copy. This could be due to a number of factors, as the latter clearly needed a quick deep clean only a dedicated machine could have allowed. On the other hand, I found the black variant organic and natural, whereas the blue/white was sharper--even piercing--in the upper-range. Neither record sounded terrible, of course, but I walked away thinking the colored release was the winner because excessive surface noise is a pet peeve of mine. Mind you, the black's minor clamor was not audible when the music was playing.

Whether or not the colored copy will hold up after repeated listens remains a mystery to me, and perhaps it's worth revisiting in a post. For now, I can largely attribute sublime sound to the record being partially transparent, much like my colorless copy of Agalloch's Marrow of the Spirit. The trend is certainly no coincidence, especially because I assume both records were made from virgin material. Clear and transparent (pick a poison) offer a layer of extensive musical immersion--not unlike properly-pressed black vinyl--and pin-pointing the source can be tough. I'm no rocket scientist, as you expected, so it's past me to break down the manufacture process.

In any case, Gogmagogical Records has done a stellar job at serving up a rock-solid sophomore release. Compared with the original offering, Fister's Violence, Cold Blue Mountain is considerably more exciting and suggest the label's roster should groove rather than plod. And that's exactly what the Ohio-based record company needs--intoxicating music that gets better with every listen. Black or blue, Cold Blue Mountain's first album is a clear winner, and the record to add to your shortlist.