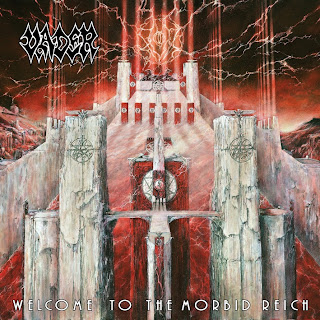 Let's preface this by saying this might well darned be album of the year. Prior to this record's release, I had very little exposure to Vader, but I was always intrigued by something about them, particularly their reputation as death metal veterans alongside Morbid Angel, Obituary, Death, and others. Vader had the "it" factor if you will, but I never got around to checking them out, which only hurt me because I missed out on some bloody exciting music. And not only that, I assume Welcome to the Morbid Reich's cover art pushed me over the edge with its positively old school vibe that oozes originality in an age filled with sterile computer-generated images. From an artistic standpoint, even the album cover is a plus to the experience.

But first thing's first: Welcome to the Morbid Reich is a fantastic introduction to death metal and Vader in general--its brutality kicks you in the face and keeps you down, but for some reason you still come back for more. The first day I had the album, I must have spun it, at the very least, five times because with each listen it grew better and better. The last metal record I remember having such an attachment to showed its face over two years ago, and that's saying something because I typically don't get overly addicted to music. Songs, yes. An entire album? Less frequently. Really, only once in a blue moon does such a thing happen.

With Welcome to the Morbid Reich, Vader have thrown everything you know and love about death metal into the collective melting pot. Guitars, which range from chuggier riffs to rapid tremolo picking, are reminiscent of the early days of death metal--exactly what the majority of Vader fans want, and stylistically very similar to what the four piece been doing their twenty-odd something existence. 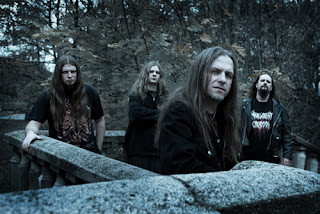 The drums also do an excellent job of driving the music with blast beats, double bass, and speedy fills that seemingly defy drumming capabilities. The bass, while never deviating far from the guitar, follows along side at hypersonic speeds and fills in the low-end nicely. Every ounce of musicianship is certainly credited to Peter, Vader's only original member, for gathering a group of young musicians who are proficient and skilled with their instruments. He is no slouch himself, of course, and sits at the top of his metal game, even after many years of performing.

Each track on Welcome to the Morbid Reich is flawlessly composed, with compositions ranging from blindingly fast numbers to more subdued pieces like "Black Velvet and Skulls of Steel." Even the intro tracks "Ultima Thule" and "They Are Coming..." are delightful because they create intense buildups and act as an accent to an already excellent collection of music. As a whole, the band sounds very tight as if they've been playing together for years, but every musician, barring Peter, made their first appearance on the record. It's remarkable when you think about it.

And even as I put my thought down for this post, I spun Vader's newest. It's still as strong as the day I received it in the mail, showing no signs of creeping boredom that threatens to rear its head when you know you've worn out a record out by playing it too much. Dare I say it, I'll continue to spin this album at least once a day for a few more months. I played it multiple times when I strolled through the gardens of Versailles, and I played it when I wrote a 15-page paper. Heck, I even play it when I'm laying in bed at night.