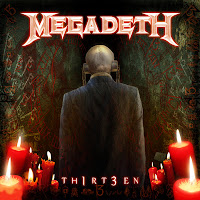 Not wanting to be one-upped by my buddy Gogs, who reviewed the album months ago, it's my turn to put in a word or two about Megadeth's latest. Surprisingly enough, when I went to purchase Th1rt3en shortly after it came out, I had a tough time finding it at Best Buy. BEST BUY. The most mainstream electronics store in the United States hardly stocked any copies of new material from one of the best known metal bands in the world. Is this signaling the death of the CD? In some ways, yes, but to not carry Megadeth's newest record in the compact disk section, no matter how small, is ridiculous to me. Certain music still sells, especially because Megadave got his cash in and recognition with Guitar Hero. Nevertheless, I grabbed one of the last copies. Was it worth it? Not really.

First thoughts: the new record sounds positively stale. Admittedly, Megadeth hasn't been great since 1992's Youthanasia, which pioneered a more heavy metal-based direction for the band, and though Countdown to Extinction signaled the beginning of the shift, year '92 perfected it. That was the last truly enjoyable thing Dave and his ever changing crew put out, but I digress. Th1rt3en comes across as compilation of left over rejects (Wait... "New World Order" and "Millennium of the Blind" didn't make a certain record...) Dave didn't deem suitable for one of the albums from the '90s, specifically Youthanasia. In short, uninspired is an excellent word for Th1rt3en's plight. At least a few great tracks call Endgame home, despite being largely forgettable; likewise, the new album has a few fun tracks, but I'd be fully content with never hearing it again in my life. So let's see here: Metallica, Slayer, and Megadeth recently released bland, nondescript albums. At the moment, Anthrax is the guiding light. What the @#$%?

As much as it pains me to say it, Dave is probably too comfortable with his fanbase, who gobble up everything he releases, proclaiming it god's gift to man. We, the hardcore fans who appreciate good music, suffer. I can't say I blame him because his rocket to the top in recent years has been pure genius. While Megadeth without a doubt isn't the biggest name in metal today, the moniker is up there with the best of 'em.

Performance-wise, the band is tight enough, but the drive, charisma, and creativity, everything essential for a metal band, are missing. Dave's vocals are tired and weak. His riffs are bland. The only thing that reminds me of a healthy Megadeth are the suitably-placed political lyrics that I'd much rather have left out of my music. Nonetheless, they're there, and while they don't break anything, they don't make anything either. Although the band is in-sync, and I don't hear any obvious flaws floating around in Mustaine's little dream world, Megadeth seems to be playing it safe with toned down drumming and guitar sections. More accessible for the nonmetal audience, I suppose. Of course, this could totally be fault of the left over tracks from other writing sessions that just weren't good enough, but it comes across as a slap in the face, and I don't like it.


Well, Mr. Mustaine, what have you got to say for yourself? You haven't made me and a lot of other fans happy. It genuinely feels as if you rushed the album just to fit the record company's wishes. And if those rumors are true, I'm even more disgusted. Megadeth will have to come back with something utterly mind blowing to pull me back into the fold. Rust in Peace, Youthanasia, and Peace Sells... are calling my name. At least they won't let me down.

Tracks you should take away from Th1rt3en are few, far, and between, but "Sudden Death," "Public Enemy No. 1," and "Black Swan" are decent enough.