You've already seen it mentioned in a "Recent Hauls" post, but Kvelertak's self-titled debut is one of the best albums I've come across this year. Some might call it party metal/hardcore, but there's no denying how entertaining the band's blend of rock 'n' roll is, and how addicting it can become after the first listen. People who dislike fun music are generally buzzkills, anyway.

Kvelertak's approach to making music isn't shrouded in mystery, so you won't be calling Scooby Doo to help you out with this one. The formula is simple: take a few power chords, some harmonized lead parts, a big dosage of "rawk," a bit of black metal, and hardcore influence, and the amalgam will be these nice Norwegian chaps. The black metal influence is typically limited to a few passages here and there, so it's much easier to call Kvelertak a melodic hardcore band or, more simply put, a rock 'n' roll band.

As groovy as Kvelertak is, there's one initial downfall listeners may or may not be able make it past: the vocals, which are procured from hardcore and solely in Norwegian. In my case, I found myself able to sidestep that minor setback and appreciate the music for what it is as fun rock 'n' roll. Of course, hardcore-style vocals won't be everyone's cup of tea, but I strongly advise you to keep listening because you'll be missing out on a heck of a record if you refuse to do so. You may, in turn, interpret them as a hardcore/black metal vocal hybrid, but you'll just have to make that decision for yourself once you finally give this fine collection of music a listen. 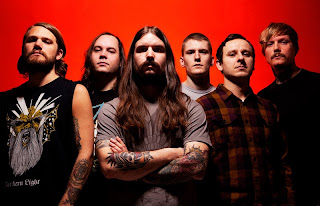 Musically, Kvelertak emphasizes what one can do with so little and manage to stay interesting. Contrary to popular belief, music doesn't have to be technical, and Kvelertak are an excellent example of this. Big hooks and meaty riffs are characteristic of the band's simple sound, so if you like those, you'll love the debut.

Aside from the wonderful melodic riffage,  my personal favorites are the harmonized lead parts that pop up in many of the tracks. They add a nice classic flavor to the music, and one that will have your brain harkening back to the good ol' days of heavy metal and rock.

But, in the end, the jury is still out. What exactly is this album? Is it metal, hardcore, punk, or rock 'n' roll? Whatever it is, it flat out rocks and should find a place in your music collection, even if you don't plan to play it much. Kvelertak will thank you for buying the record, you'll thank yourself for buying it, and, most importantly, you'll be in pure aural bliss when giving it a test drive. In that case, I suppose your ears will thank you too because this is the rock 'n' roll release of 2010.