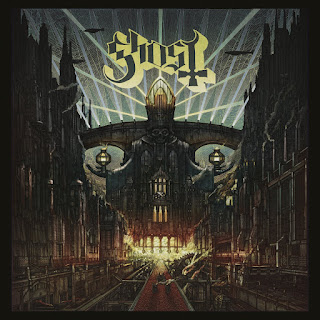 
But like anything else, there's much more to it than that. After all, reactions of that nature are almost always superficial and don't make use of the proverbial magnifying glass needed to closely examine music. Deceptively simple and light, what the mysterious six-piece puts forth is a mix of their debut's dark attitude and sophomore entry's poppy tendencies. And what a combination it is, being that the record is leaps and bounds above Infestissuam, though it doesn't quite match Opus Eponymous, a record Ghost may never top, in spite of their best efforts.

Whereas Infestissuam was the perfect example of the dreaded sophomore slump, Meliora gains traction by focusing on cleaner songwriting and implementation of unique instrumentation. For one, the thick, proggy synths found across the album are a welcome change of pace and fare better than the creepy, autonomous choirs that felt disconnected from the rest of the music on Infestissuam. Perhaps more exciting, though, is the reintroduction of bouncy, squirming guitar riffs that powerfully anchor themselves under the music and remind that Ghost is still a hard rock/metal band, however slight. 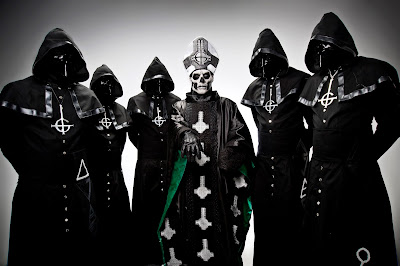 But, unfortunately, Ghost continues to flirt with mediocrity. Vocally, Papa Emeritus just doesn't cut it, sounding shockingly timid. Had the band ditched the pop sensibilities and song structures, this would be inexcusable. But because they tread a fine line between dark pop and hard rock, it seems to work--though not without qualm or two. But beggars can't be choosers--by nature, Ghost is inherently flawed and, with their aspirations to capture mainstream music listeners, won't change anytime soon.

Yet, despite weak vocals, musically, Meliora is a glimmering ray of hope for Ghost and puts their brand of demon pop back on the map after an atrocious EP, If You Have Ghost, and sophomore clusterfuck, Infestissuam. Bested only by Opus Eponymous, Meliora positions itself favorably in Ghost's discography and offers a compelling blend of their various personalities. But given their fetish for vocal and musical (Infestissuam!) mediocrity, that glimmering ray may grow dimmer in the next few years. Time will tell.