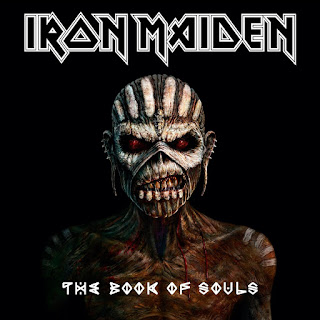 When Iron Maiden unveiled The Book of Souls' first single, "Speed of Light," in August, disappointment set in faster than the (get ready for it) speed of light. The song felt tired and lazy; the riffs generic and the writing completely typical of contemporary Iron Maiden rockers. Feelings of "where is the metallic guitar playing?" set in, making this reviewer curious about the direction the band intended to go in for the rest of the album.

Upon the record's release earlier this month, first listens weren't particularly promising. The Book of Souls was no Brave New World or Dance of Death. It didn't even match A Matter of Life and Death, which was a step back from those two, and it fell at the feet of The Final Frontier, which was a collection of music lacking writing prowess and attentiveness.

What Iron Maiden has effectively done with The Book of Souls is capitalize on the formula implemented heavily on A Matter of Life and Death: that of sprawling, "proggy" heavy metal distant from much of their past. To be sure, the quality is more akin to The Final Frontier, despite outshining that record on a number of occasions. But when judged as a complete body of work, too many niggling inconsistencies drag The Book of Souls down past The Final Frontier, which is a real shame, given that record was released five years ago.

Important to note is the shear breadth of The Book of Souls' material. Iron Maiden has been known--especially since 2000--for an outrageous amount of repetition, which is easily forgiven if the quality of the material is up to snuff. For The Book of Souls, however, that's not so much the case--the album tends to stretch songs past the 10 minute mark, when they would benefit from a sizable trimming. "The Red and the Black" and newfound epic, "Empire of the Clouds," are the best examples of this, bursting at the seams with 14 and 18 minutes of "experimental" indulgence. Transitions are rough in spots, too, making one wonder if this is the same band responsible for classics such as "Powerslave."


A Pair of Humorous Comments About The Book of Souls pulled from Last.fm:

Dickinson also begins to show his age across the record. At 57, he still sounds great, but his
attempts to traverse vocal territory relished in his past prove futile. One listen to the introduction of "When the River Runs Deep" shows the Air Raid Siren straining to reach heights now past his capabilities. Sections of "The Great Unknown" are the same way, and Dickinson would be better suited to work within his current, though still extremely capable, range. 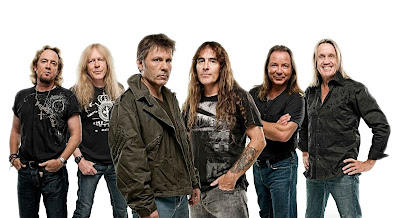 But while Dickinson's vocals may be among The Book of Souls' biggest setbacks, musically, the album isn't without issues. McBrain's laziness behind the kit finally catches up with him, with [no exaggeration] only a handful of drum fills being his choice of attack when attempting to mix up the music. A lack of metallic guitar riffs is also noticeable, as Smith, Gers, and Murray prefer to hold chords, play leads, or rhythmically support the songs, instead of supplementing them with gripping playing. What's the most surprising, though, is sloppiness on Harris' part--the introduction of "The Red and the Black" is hastily played and reminiscent of an amateur.

Musically, what happened to Iron Maiden isn't a secret. Hardcore fans prefer to call it evolution or a new outlook, but in reality, the band lacks inspiration and direction. Many times, it has been said that, with the exception of Dickinson, the membership rarely listens to music these days, and it shows with stale, dry songwriting and half-baked ideas. Writing music is like reading; to write well, one must read others' work and form opinions of what is and what isn't a good piece of writing. Practice is only one piece of the puzzle and, if one practices without enriching his or her mind, one will travel in circles, which The Book of Souls in a nutshell.

Inevitably, detractors will draw clichéd comparisons with Iron Maiden's golden age material. But what they fail to consider is that, while the membership is the same, this isn't the same band--their goals are very different, as is their collective mindset. Expecting Iron Maiden to equal Powerslave or Somewhere in Time is completely out of the question--one is 30 years old while the other is approaching it.

With that said, what contributes to the sack of youthful energy is Kevin Shirley's horrid production job. Maiden would do well to kick the man to the curb, but Harris keeps Shirley close, as his perception of decent sound has been warped for years. Drums are cardboard and hollow sounding, the guitars are devoid  of oomph, and the general lack of heaviness to the mix is typical of modern Iron Maiden.

Ultimately, it's hard to tell where Iron Maiden will go from here. With obsessive fans and the band calling it a crowning achievement, will the six-piece call it quits after The Book of Souls? Time well tell, of course, but the future looks dim, if this is the direction Iron Maiden keeps heading.

Best of the Bunch: "If Eternity Should Fail," Parts of "The Red and the Black," "When the River Runs Deep," and "Tears of a Clown."