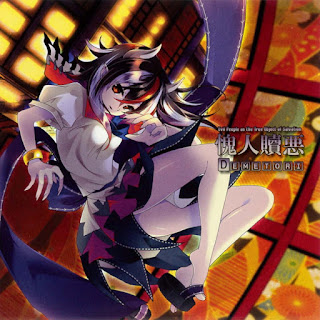 In late 2013, Demetori quietly released Le Grimoire De Reve, an album fans claimed was a vast improvement over Begierde Des Zauberer and, more importantly, a return to form. I, however, personally found the record a step behind Begierde Des Zauberer, though it was classical Demetori, but still praised the band for playing it safe. For 2015, the two-piece has done very much the same with Evil People as the True Subject of Salvation, but the quality is step above Le Grimoire De Reve, with their always-improving chops and knack for melody being the main driving force behind each song.

What elevates Evil People as the True Subject of Salvation above Le Grimoire De Reve is a question to consider when making your way through the record. Stylistically, the album is Demetori through and through--there are no surprises and the two-piece sticks to the same writing process in place since their inception. Where differences become apparent, however, is in the arrangement process. Although I'm wholly ignorant of Touhou, the video game series Demetori compositions are based upon, I can tell many of these tracks are similar to songs the two-piece has arranged across previous albums. Nevertheless, the difference is that attention to detail is higher, with stickier melodies and a balance of rhythmic aerobatics from Kyuhouji's drumming. Tracks like "Counter-Clock World" are absolutely punishing in how they pummel you with a combination of galloping riffs and speedy percussion, while "Grief of Ressentiment" sits at the opposite of the spectrum with a slower, though emotionally crushing, tempos and instrumentation. And, for what it lacks in English proficiency, "Flow My Tears, the Said" makes up for the shortcoming by being the most memorable of the record and a career slam dunk for Demetori.

What I feel is lost on the record, though, are the short, filler-like introductions. "Double Dealing" attempts to build up to bombastic opener "Type A Personality," but it appears tacked on to the rest of the record, being comprised of ambient sounds. Similarly, while I like the idea of "The Shining Needle Castle Sinking in the Air's" acoustic atmosphere, it doesn't transition well into "Counter-Clock World" and comes across as a hasty afterthought.

Ultimately, despite the two silly introductions, Evil People as the True Subject of Salvation is another valuable addition to the Demetori discography. You'd be correct in thinking that it's very, very close to Le Grimoire De Reve, but nuances are indeed there and surface with extended listening. The bottom line is, if you're a Demetori fan, you'll love this record to pieces. And, hell, even if you're not, you'll still enjoy it because they're at the top of their game.