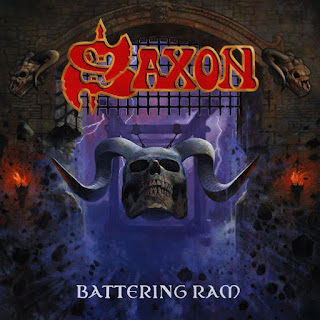 The new Saxon track, "Battering Ram," pretty much speaks for itself--what you hear is what you get, and there's nothing more to it. That's the way Saxon has always been, and after a zillion-year existence, it's not going to change any time soon.

The music is good--perhaps too good because it shows other veteran metal bands how to kick ass.

This is balls-to-the-wall (Accept reference intended) heavy metal how it should be played. Andy Sneap is by no means a proper producer--everything he touches sounds sterile and similar, after all--but at least the music has the bite and pomp to it that any heavy band deserves.

The music itself is typical contemporary Saxon: chunky riffs, and unfaltering, though not particularly interesting, drumming, with Biff's distinctive vocals placed on top. Saxon has become so consistent that there really aren't any surprises here, sadly. But thinking back on it, that's probably a good thing. They're like Lemmy and his crew--always churning out predictable music, but at least it's quality.

Maiden and Kevin Shirley could learn a thing or two from Saxon. It's an odd turn of events watching Iron Maiden fall to a group that has, historically, been their lesser, but the modern-day bite, grit, and energy doesn't lie.

Email ThisBlogThis!Share to TwitterShare to FacebookShare to Pinterest
Labels: Saxon