Taking Weeaboo to the Next Level: LadyBaby 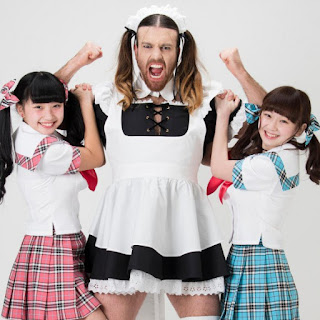 This is not how I envisioned my first blog post in quite some time, but I can't resist the temptation.


As I sat down to my desk a few mornings ago, I noticed a text from a friend with a link. Typically, these are links to Asian pop music because he knows it's a vice of mine and a genre I shamelessly enjoy with a fervent passion. What the link's thumbnail suggested was pretty standard fare--a trio comprised entirely of women. Or so I thought.

Looking closer revealed that the middle member was a tad bigger than the girls to the left and right. Intrigued, I thumbed the play button and realized what I assumed was another bubbly dance song couldn't be more wrong--the middle member was indeed a cross-dressed man and and Australian at that. Metallic sounds quickly overtook the speakers, reminding me a of BabyMetal, a group that I hold mixed feelings about but gave props to last year on my best songs of 2014 list.

If told me you were out, I can't say I'd blame you--BabyMetal is, after all, highly controversial in the metal community. But get this: LadyBaby, as the Australian-fronted group is called, is different because they deliberately walk a fine line between humorous and serious music. Standard exports from Japan are cultural phenomena such as food, anime, and fashion, and LadyBaby pokes fun at those as a way to pull in views from all around the world. And with only a week elapsed since the video's posting--and with 2.4 million hits to boot--they've done a damn fine job. 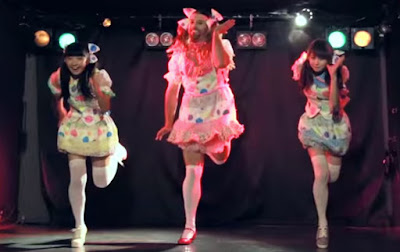 What underpins the song, too, is generally well-thought out and tactfully combines Japanese pop and metal music. Whereas BabyMetal tends to feel like a pot of sugar and devilish playthings hastily mixed together, LadyBaby does a decent job of creating balance between the two. There's something here for everyone, really, be it culturally, humorously, or musically.

In an interview with Forbes, LadyBeard (yes, that's what the large Australian man calls himself) mentioned that he wrestles, revels in cross dressing, listens to metal, and loves being weird. That's cool and all because, well, it's Japan. A group like this wouldn't see the light of day anywhere else, and it sure as hell wouldn't thrive without the internet. I can guarantee you that a huge portion of viewers will never admit--at least in real life--to liking the song or concept.

In other words, LadyBaby won't be the next Psy.

Oddly, I learned from the comment section of Metal Injection's article (an over-fodder site, but perhaps we'll touch on that another time) that one of the girls supposedly released suggestive photos and videos prior to LadyBaby. I can tell you that I have no intention of finding out if that's true or not, but either way, it doesn't affect my enjoyment of the song. I take it for what it is--hilarious satire on Japanese culture and metal music--and don't give it a second thought. With information only a click away these days--true or not--anyone can find something to bitch about. And there's nothing better than a lively bitchfest to keep something relevant. As the old saying goes, any press is good press.

Check out the video below.