Wonderfully Nerdy: A Conversation with Øyvind Rekdal of Cleaver & Chton 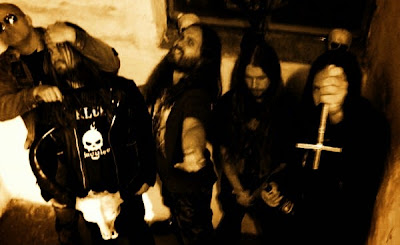 At The Metal Advisor, we make it no secret that we love Cleaver, Chton, and their free-spirited members to death. Three years ago, we interviewed Cleaver for the first time and found them cordial, sincere, and, best of all, fun as hell, so we naturally jumped at the chance to talk with them again--and Øyvind was ready and raring to go at the opportunity.

Our goal with this interview was to get a bit more personal and find out what drives the collective membership (or, in this case, Øyvind!). The story behind Cleaver's music and what inspires their themes and imagery were questions we curiously pondered, as we absorbed Øyvind's grimy, spacey sci-fi answers. Or perhaps it was the horror books and films the band spoke highly of in the past. Regardless, it was a bunch of hoopla and folklore to us, but we're eager to learn and, with Øyvind's book and film recommendations in hand, we have an extremely solid place to start.

And you will, too.

It's been some time since we last spoke--fill us in on what's happening in the Cleaver camp. Any new music on the horizon?

Øyvind: Well, it’s a lot going on in the Cleaver camp, and new music is exactly the main thing going on at the moment. We’re in the final stage of recording our new album that will be titled No Cure for Cleaver.  If everything goes according to plan, which I’m sorry to say it seldom does, the new album will be out autumn 2015. Anyway, it shouldn’t take too long before you can pollute your ears with some new Cleaver material. And we are now in search for a label to release the new record, too. Yeah, and we got some new members in the band that are getting into new and old Cleaver songs.

How are you doing, by the way, Øyvind? Have you added any new guitar or recording gear to your arsenal?

Øyvind: I’m doing good and will do even better when the new Cleaver album is out. The best thing about finishing recording an album is that it’s time to create new music again, which is the best part of playing in a band, in my opinion.

Yeah, actually, I bought a new guitar very recently. It was an acoustic guitar, so not very metal, though. Since I don’t play much acoustic, I just bought a cheap guitar with a label called Morgan. Apparently, I don’t have many soft sides needing to be expressed by music since I almost haven’t touched the guitar since I bought it, but I have some plans for it. Not going Bob Dylan any time soon, though, but we actually have used acoustic guitars in the background on some previous Cleaver songs, which gives a pretty cool effect. If you listen closely on songs like “Suicide,” “The Dead Will Walk the Earth,” and “Demon Semen,” you will find acoustic guitars on some parts of the songs.

What about Necrostable Records? You are, in some way, related to the label, correct?

Øyvind: Well, I’m actually one of the few in Cleaver who is not involved in Necrostable Records. Necrostable Records is run by Espen (Cleaver, Chton), Ola (ex-Cleaver), and Andreas (Cleaver). But, of course, I’ve got a lot of interests in the work they do with the label and try to help out spreading their stuff. But I’ve got enough making music and being part of two bands. No time being part of running a label on top of that.

Tell us what you've been reading and watching lately. I hear you're into sci-fi.

Øyvind: [Laughs] You got my nerdy side there. I’m really into sci-fi, horror, and fantasy, but I guess you can say that sci-fi is the main thing for me these days, which means I read and watch a lot of it. When it comes to reading, I recently finished the four books in the Ender saga by Orson Scott Card, which was great reading. Pretty hardcore sci-fi, and it has a lot of problems revolving around ethical and moral stuff, so not for everyone, I guess. Fun fact: “Seventh Son of a Seventh Son” by Iron Maiden is actually based on one of Orson Scott Cards books--not from the Ender saga, though.

When it comes to watching, it has been a lot of super hero stuff lately. Now I watch the Arrow series, which is OK, but nothing more. And I’ve started to watch some Batman animations, which I think have been really good. So, yeah, I’m that nerdy.

Does sci-fi influence your music in any way?

Øyvind: I can’t say it does, but I have thought of incorporating it a lot of times. Just never did it yet. When it comes to music, I’ve usually based it around horror stuff, which I’ve also been very big fan of. So it will not be hard to see the horror references in Cleaver and Chton.

Did you grow up liking books and films in the genre, or is it a taste that came as your interests matured?

Øyvind: I grew up with a lot of it. Star Wars of course was, and still is, a big thing. When it comes to horror, I still remember stuff like Tales from the Crypt when I was a kid, so, yeah, I grew up with it, and it has kept on growing on me. I used to play a lot of role-playing games in my youth, too. I have always been reading a lot--not just sci-fi, fantasy and horror, though, but that has been a big part of it. I guess I’ve always been into stuff that triggers my imagination.

What do you think sci-fi's place is in entertainment and literature? Is it something only the "nerdy" realm would understand, or do you suspect it has broader appeal?

Øyvind: 10 years ago, I would say it was mainly a realm for the nerdy, but all that has totally changed in recent years. I remember it was hard to find great sci-fi series and movies, but now the biggest block buster often are sci-fi movies. Marvel and DC super hero movies, The Hobbit, Lord of the Rings, Game of Thrones, and new Star Wars movies are the main talk these days. You also see in bookstores that sci-fi and fantasy isn’t hidden away anymore at some dusty bookshelves where only the nerds know the way. They are actually part of the bestseller lists. But, of course, there will always be sci-fi that will be in the nerdy realm and never appeal to the great masses.

I know for a fact that horror books and films influence Cleaver's music. What
place do they have in your music? Any particular works you'd recommend as essential reading or watching to metalheads?

Øyvind: They have a big place in both Cleaver and Chton, but it is two different kinds of horror genres that have inspired Cleaver and Chton, I guess. In Chton, we have been more inspired by dark and mythic horror like Lovecraft-stories, Hellraiser, etc. With Cleaver, it’s more graphic and straightforward like zombies, serial killers, slashers, etc. And I think that’s what fits Cleaver and Chton’s music. I don’t know any reading or watching that is essential for metalheads, but I can of course give a lot of recommendations for sci-fi, fantasy and horror. Here goes:

- Dark City
- Battlestar Galactica (The new series; haven’t seen the old one)
- Clockwork Orange
- Jacob's Ladder
- Event Horizon
- Alien movies
- Hellraiser movies (OK, some of the movies in this series are really shitty, but the best ones are amazing)

And, when it comes to gaming, just play through Mass Effect--a great universe.

Your last record, The Sickest Tales, was a fun, no-nonsense record that had an very "old school" feeling. Do you foresee your music moving away from that sound, or do you plan to keep it simple and real, meaning no bullshit? If you recall, that's exactly how I described The Sickest Tales last year--it cuts straight though the bullshit.

Øyvind: The plan for Cleaver has always been to keep it simple and play straightforward, old school extreme metal. I don’t see Cleaver doing anything other than exactly that. But I think we are getting a lot better at what we do, and we are getting an even clearer picture of what we want Cleaver to be. The new album will have stronger material than we’ve done before, in my opinion.

And, if we shift gears a bit, what have you been listening to lately? Do you have any favorite records from last year? What about this year (so far)? It's always nice to get an idea of what musicians are listening to on a regular basis. Often times, it helps reveal how they view music, and where they derive their influences.

Øyvind: I think 90% of the music I listen to is some sort of metal. These are some of the albums I’ve been listening a lot to lately:

- Enslaved – In Times (This will be one of the greatest albums of 2015.)
- Mantar – Death by Burning (One of the great albums from last year.)
- Cattle Decapitation – Monolith of Inhumanity
- Europe – War of Kings (Never thought I would say this in 2015, but the latest Europe album kicks ass. It does not sound glam and has a great ‘70s rock vibe to it.)
- Judas Priest – Redeemer of Souls (Surprisingly good album from Judas Priest last year.)

When I’m not listening to metal, I listen a lot to Antimatter. This have been my favorite non-metal band for years now. The latest Manes album is also great.

How is the rest of the band doing--you know, Espen, Andreas, Jon, and Kjetil?

Øyvind: I think they all doing great. Some family stuff; Espen is getting married, and Andreas has another kid coming up. Kjetil has been recording with one of his other bands, Sjodogg, and is now ready to do the vocals on the new Cleaver album. Other than that, we drink booze, listen to metal, and play music. Everything the way we want it.

You've had a bit of a lineup shift, too. Christer left, and Ola seems to be focusing more on Chton. Jon and Kjetil are the newcomers!

Øyvind: Yeah, bands take a lot of time and is a lot of work, so it’s not hard to understand why it’s difficult to be part of band with family, work, and everything else going on. We parted with Christer and Ola on good terms, and they are still good friends. Luckily, we found Jon and Kjetil to step in on short notice, so we still keep working on the new record without any big holdups.

Øyvind: Just want to thank you for a great and different interview. Great questions.