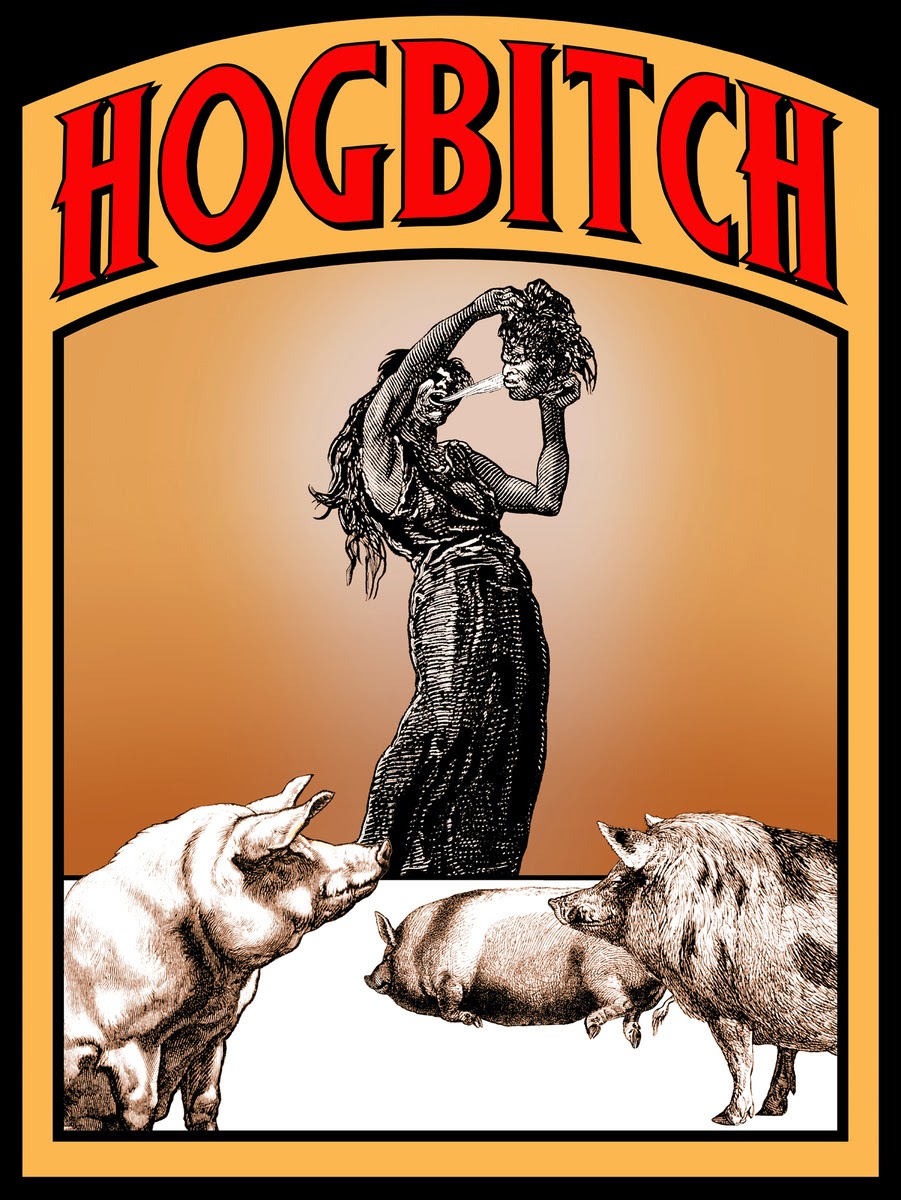 The Metal Advisor sits down with Sanford, Patrick, Suzy, and Chip of Hogbitch for a brief interview, where the band tells all about their origins, members' previous projects, recording, and the kookie term, Ur-metal.

Give us the backstory on Hogbitch. How did you form? Was it a spur of the moment thing?

Patrick: I think it was due to us all being longtime friends and [being] used to working in other projects together. Chip, Sanford, and I all played in an industrial noise band in the '90s called Evil Mothers. We did a reunion tour together around 2011, [and] then ended up putting together a short lived three-piece project for a benefit show shortly after. Later, we spoke about doing a more metal-inspired band, and Suzy was the natural choice for vocals.

Sanford: Patrick and I also were in a band called Boxcar Satan for years; sort of a mash-up of angular post punk and blues, and we occasionally collaborated with Suzy. We'd backed her up on some recordings, and she'd added vocals to a song or two on our CDs as well. It seemed logical to take that collaboration to the next level.

You often refer to your music as Ur-metal. Can you explain what that is, and why it's so important in describing your sound?

Sanford: Chip came up with that description at practice shortly after our set started taking shape, and it just seemed to fit. “Ur-“ is a Germanic prefix signifying something is of the oldest or most primordial state, and I assume most folks reading this blog know what “metal” is. I suppose it’s another way of describing ourselves "proto-metal” but with some added panache!

Patrick: “Ur” is also an elder-futhark rune that signifies the heavy strength and power of a long-extinct horned beast. 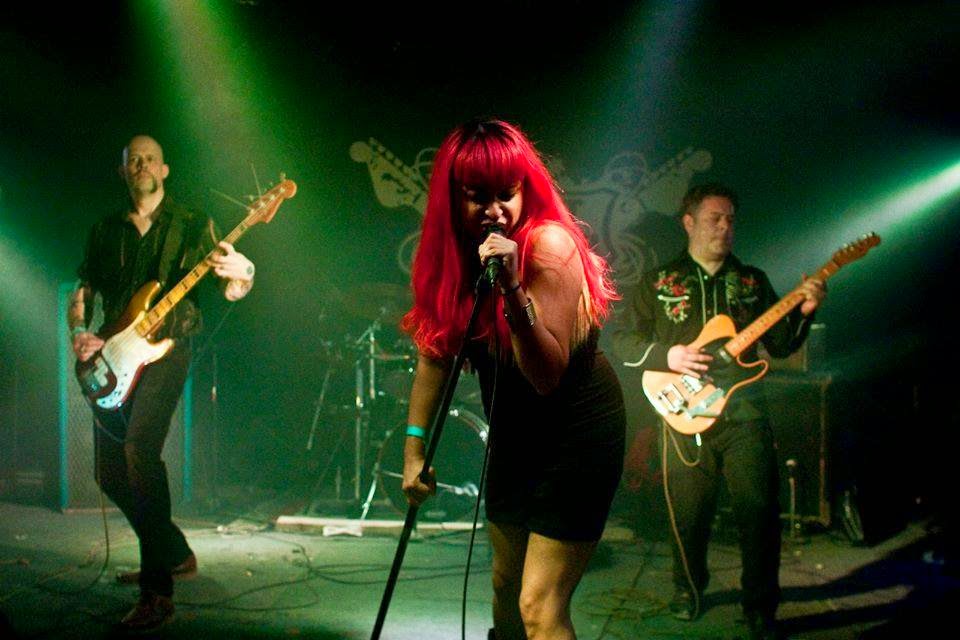 These days, many bands are playing a mixture of stoner rock, psychedelic rock, and doom metal, which is a bit like what you are doing. Do you see yourself as part of that, with, for example, bands like Orchid? Or are you doing your own thing?

Sanford: While I like Orchid quite a bit, and I think they've released some enjoyable albums, I see Hogbitch a little differently. Black Sabbath and other heavy '70s bands clearly are a strong influence on us, but I don't think we're quite as interested as Orchid in completely replicating that sound to carry on its legacy. Personally, I'd rather throw a variety of interesting sounds into the blender, hit the "frappe" button and see what comes out. Our song "Skin Don't You Know Me" is probably influenced more by the angular post-punk of the Birthday Party than Black Sabbath, for example, while "Consumptive Sun" has both post-punk and Kraut rock elements tacked on to an almost Zeppelin-esque chorus. To me, it’s more fun to create sonic paintings with a wide-open color palette.

Patrick: We're doing what we like, which happens to draw heavy on the psychedelic metal made before the 1980s. If we somehow fit into a larger picture of like-minded folks that's fine, too.

We already know Black Sabbath is one of your main influences, but are there any other artists who inspire you?

Sanford: I like a lot of proto-metal and New Wave of British Heavy Metal bands, among them Lucifer's Friend, Blue Oyster Cult, Budgie, Atomic Rooster, Cirith Ungol, Demon, Bang, and early Maiden and Priest. I also have an affinity for Krautrock and psychedelic stuff like Hawkwind, Amon Duul II, Can, Faust, Roky Erickson, and Jefferson Airplane. I'd say both sets of influences weigh heavily on the music I write for Hogbitch. Of course, I listen to plenty of other kinds of music, from Delta blues and old time-y country, to avant garde jazz and Indian classical music—and I suspect that material seeps into the songwriting on a more subconscious level. 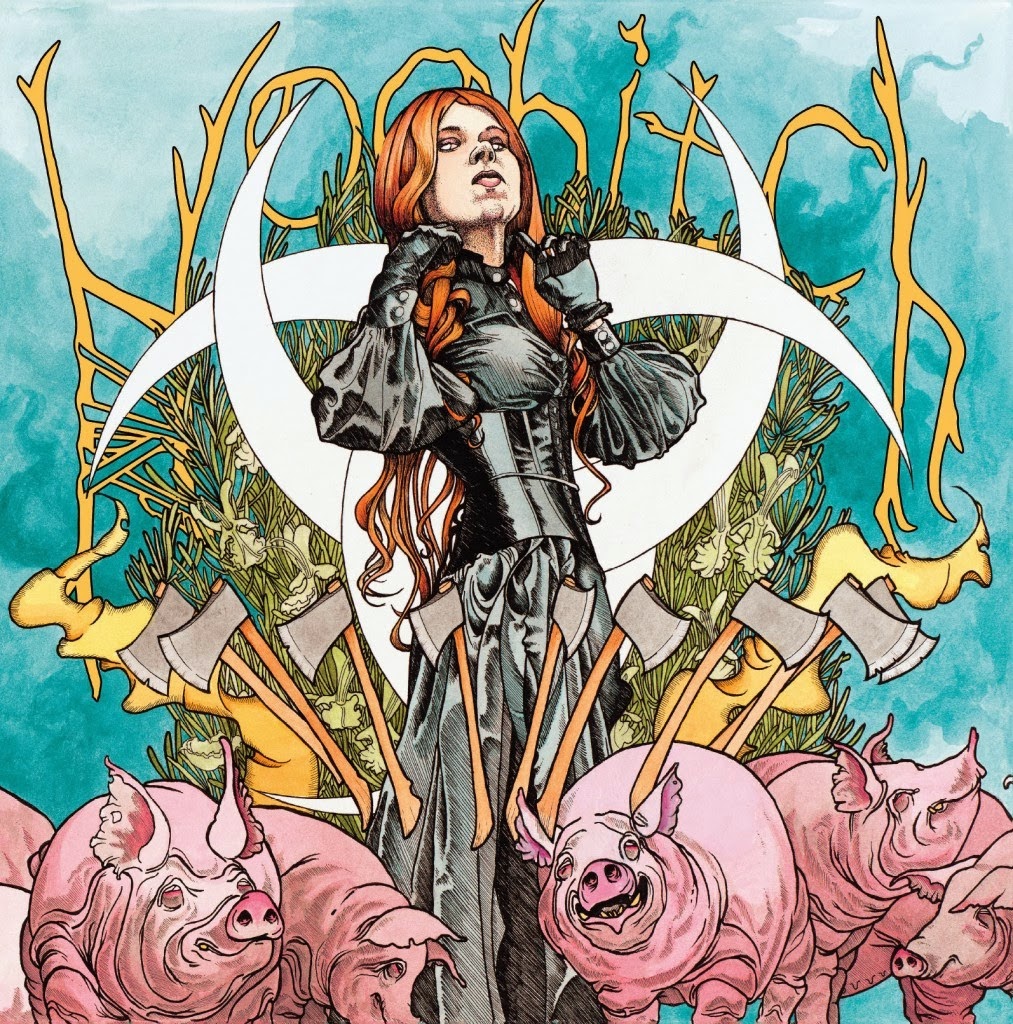 What first drew me to your music was the cover art. While I think it’s silly—and I mean that in a good way—it’s definitely unique. Can you tell us a bit about the artist who dreamed it up for you?

Patrick: Silly and unique are high praise, indeed. Chris Panatier, a fellow Texan, is the artist and he definitely gets Hogbitch. That was his take on us, and we're collaborating on our next release as well.

Sanford: I discovered Chris’ work on the Internet and immediately fell in love with it. I liked that he works with some dark themes but definitely approaches them in a playful, surreal manner. It seems like a natural match for our music and lyrics, which can veer into the downbeat at times but don’t necessarily take themselves too seriously. I suppose I’m also drawn to the handcrafted nature of Chris’ work. It’s so meticulous and detailed, yet he uses no computers during the drawing, inking, or painting process.

As you already know, I absolutely love your debut. It’s catchy, the songwriting is excellent, and Suzy is a heck of a vocalist. But that leaves one question—are you satisfied with the way it turned out? Do you have a favorite aspect of the record?

Patrick: I think it's a solid group of tunes recorded well, and an accurate portrayal of that time. Of course, some of the songs were in more formative stages and have evolved slightly, as we’ve played them live over time, but I don't see that as a bad thing.

Chip: I love the way it was recorded—on old equipment in an old, condemned house.

Sanford: I enjoyed being able to write catchy riffs and big choruses that aren’t afraid to go for the hook. After years trying to be angular, odd, and difficult in Boxcar Satan, it’s been fun to exercise a different kind of writing muscle. 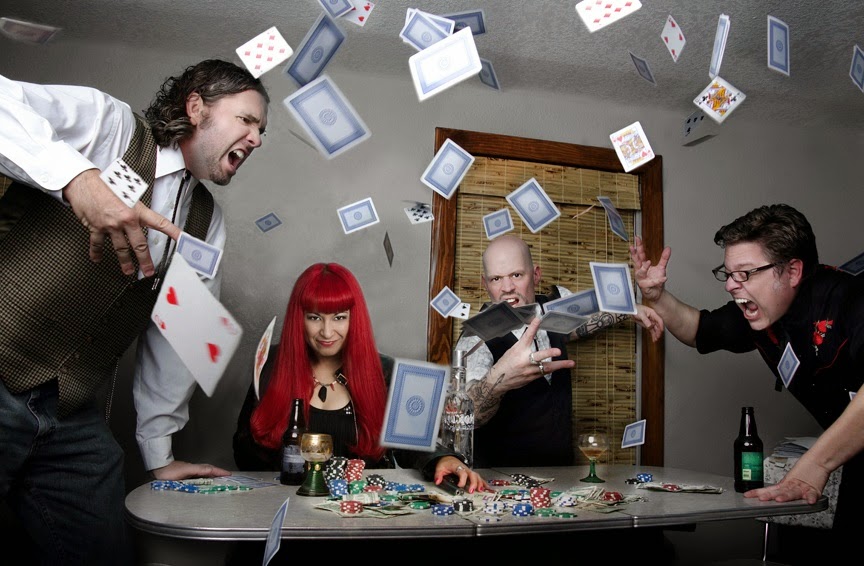 If you could rewrite the album, would you do anything differently?

Sanford: Not sure I would rewrite anything, but I do wish we'd have been able to add some more exotic instrumentation to "Hameh." A kamancheh, which is a Persian bowed string instrument, or a rebab, its Arabic cousin, would have been a nice addition. Failing that, I tried to find a violinist to play on the song, but I couldn't interest anybody who was able to work on our timetable. I abandoned that idea after I realized it would delay the album release.

Chip: Rewrite, no. Rerecord, maybe. The album was recorded in two sessions, separated by a few weeks in time. For me, the second session felt a little more comfortable, simply because the setting and process were more familiar and practiced. I felt that my playing was a little crisper during the second session. There are some songs from the first session that I think I could do better, but re-tracking them wasn't a realistic option at that point.

Rumor has it that you’re working on a new music video. Can you tell us anything about it?

Sanford: We’re actually working on two. The first is for the song “Black Corridor,” which takes its name from a great science fiction novel by Michael Moorcock. We got to dress up like Vikings for that one thanks to our dear costume-designer friend Tammy and filmed it on Skelmir, a replica of a Viking longship created by the wild South Texas Norsemen of the Ansteorra Longship Company (http://rholtz.home.texas.net/Index.html). That video is still in editing stages, but we hope to release it later in the summer. We’ll be debuting the video for “Hameh” in the next few days, however. That video was animated by an incredibly talented San Antonio artist named Mike Fisher (http://www.goofaman.com/). We previously collaborated with Mike on his short animated film “Uncanny Valley,” for which we provided the soundtrack. 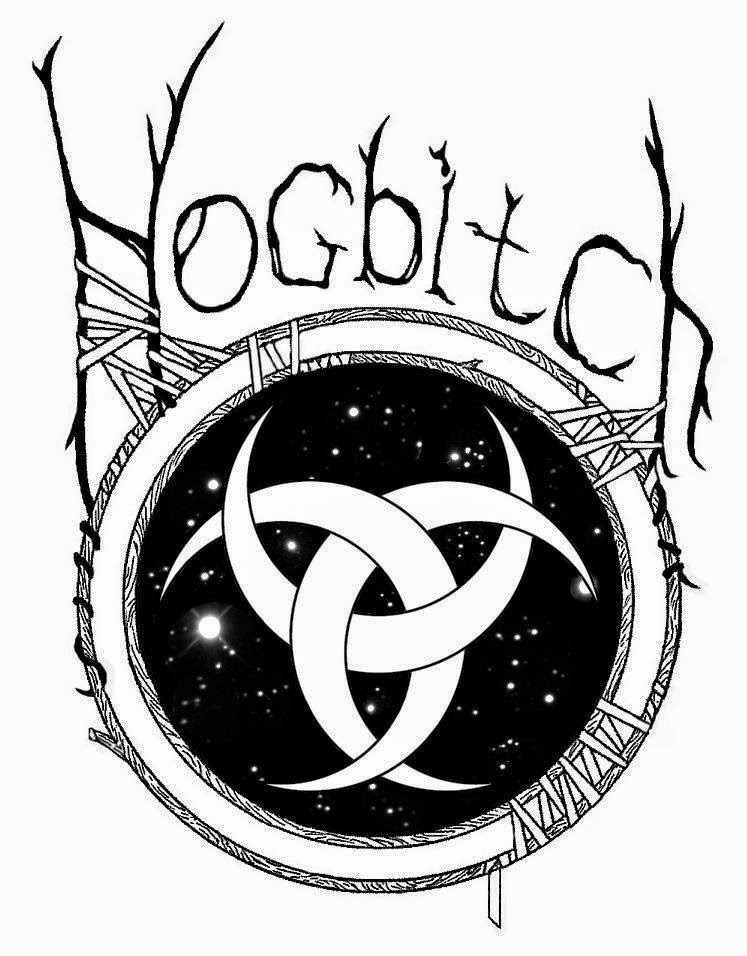 As far as I know, you tend to stick around Texas when you tour. Do you have any plans to tour outside the state because I, for one, would love to see Hogbitch live.

Sanford: Funny you should ask. We leave soon on a two-week tour that will take us through the South, up the East Coast, and over to the Great Lakes area. Check out our webpage for the dates (http://hogbitchtexas.com/tour/). Maybe we’ll see you there.

What are you currently listening to? Are there in albums released in 2014 that you find yourself really loving and would recommend?

Patrick: I listen to a lot of Finnish folk metal like Korpiklaani and Finntroll. SubRosa and Blood Ceremony are also favorites. Swans' To Be Kind is my favorite 2014 release, though I'm anticipating the new one from Solstafir.

Sanford: Check 'Em Before You Wreck 'Em by Admiral Sir Cloudesley Shovell has been on my turntable a lot lately.

Suzy: Selim Lemouchi & His Enemies' Earth Air Spirit Water Fire. Selim's final album. He and I corresponded about its writing and production daily as he recorded it and as we recorded our debut. Our first album and his last.

Chip: Night of the Demon by Demon and Court in the Act by Satan—both killer NWoBHM albums. As far as 2014 releases, the new Tombs, Savage Gold,  kicks ass, as does Pyrrhon's Mother of Virtues.

Sanford: Expect at least a few more Hogbitch albums. We’re having too much fun to quit now.