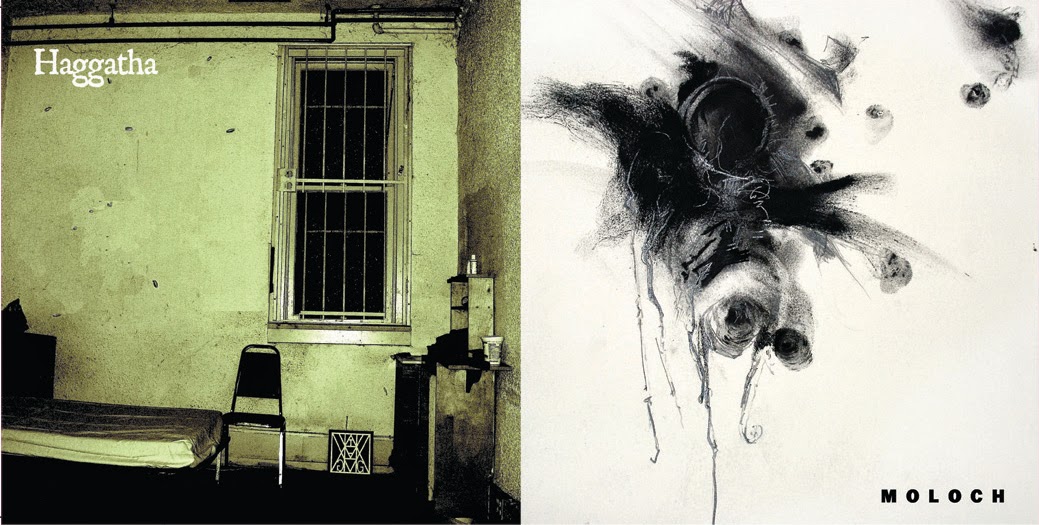 Chances are, once you've heard one sludgey doom metal band, you think you've heard them all and, to be honest, that's extremely tough to argue against. The issue with music slowed to a grinding halt and engulfed in distortion is that, unless a particularly creative mind is behind it, there isn't much one can do to stand out from another artist following the same criteria.

Thankfully, that doesn't mean great bands in a similar vein don't exist, because it's actually quite the opposite. Haggatha and Moloch, two sludgey doom metal acts sharing space on an upcoming split, don't exactly bring anything new to the table, but they do display dexterity with their craft and clearly know their way around both sludge and doom metal. And while they differ radically with their respective approaches to the music, their two-track split is very much worth seeking out because, at least for Haggatha, the material is fluid and easy to get lost in.

Even so, know that Moloch is no slouch; their contribution to the split simply suffers from a "been there, done that" feeling all too familiar for listeners with a significant amount of time invested in a style of music. If you recall, a band featured on The Metal Advisor in the past, Fister, combined an assortment of vocal styles, but favored a scratchy screech placed over music with a generous amount of feedback. Well, Moloch is more or less right on that mark, but in the end, Fister reigns supreme, beating the English quartet note for note.

What makes Haggatha the shining star are dark, brooding melodies played in conjunction with a death metal-like growl--perfect for the evil aesthetic and malevolent nature of the music. While Moloch isn't bad by any means, being out performed by your split mate is just an unfortunate consequence of being one of two artists on a release and gives them something to work toward, if you think about it. Not everyone will agree, of course, but, hey, opinions are like assholes; everyone has one, and everyone thinks everyone else's stinks.