Delain is, quite frankly, an interesting band. The cover of their fourth full-length, The Human Contradiction, reeks of gothic metal through and through, but one listen confirms that it's slightly different, with added flair best described as a theater sing-along meets heavy metal music. Yes, you read that correctly; these are extravagant, climactic melodies, and the symphonic elements, which make the music feel even bigger than it already is, wrap Delain's current crowning achievement into an explosive package of accessibility.

Falling in line with that, too, is an average song length of three to five minutes, making The Human Contradiction a joy to listen to, with nothing that overstays its welcome. Delain's greatest strength is that they know when to hang it up, all while hitting the sweet spot for track length. There's nothing so drawn out that you'll recoil at the thought of, say, an unbearably long Dream Theater song, and neither is anything so short that you'll be left wanting more.

As a result, the entire record is freakishly easy to absorb and digest, both actively and as background music. No matter how it's done, after a mere spin, the gamut remains memorable, and the only way to purge, or fuel, the addiction is another run through the album. And that's a big part of Delain's allure; the beauty of simplistic, catchy melody. Any more complicated and The Human Contradiction just wouldn't be as appealing. 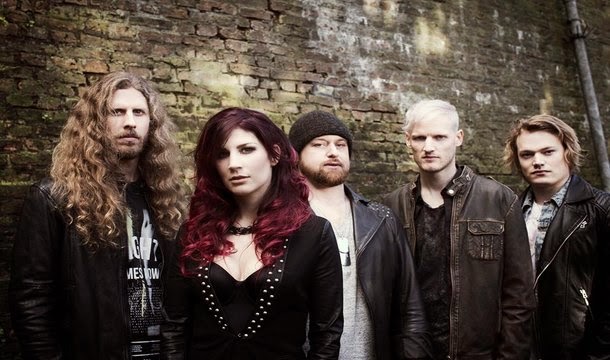 Perhaps the perfect example of this beautiful, simplistic melody is the lead single, "Stardust." A driving, uplifting piece, the music pushes all the right buttons for anyone into pop but leaves a welcoming bridge for those looking to explore something a little more abrasive. Indeed, while the songwriting is still largely rooted in the commercialism, the drum's stout impact and the stormy entrance of the guitar create a tempting proposition that heavier music can be accessible. And, naturally, by tapping their talent for melody and vocals, Delain makes the most of this.

The remainder of the track listing is just as enticing, too, with a variety of influences and lyrical themes spread throughout. "Here Come the Vultures" is a superb example of Delain's theatrics, while "Your Body is a Battleground" centers around the touchy subject of a person's reliance on medication for survival and "Tell Me, Mechanist" on the topic of the passage of time. The same bombasticness goes for "Sing to Me" and "Don't Let Go," which will satisfy even the sweetest tooth with an assortment of sugary vocal hooks and instrumentation. The downside is that, despite being brand new songs, "Don't Let Go" and "Scarlet" are considered bonus tracks and, as such, receive somewhat lower production values. Moving them to the regular roster wouldn't be a bad idea. In fact, it would be a grand one, because they're among the most enjoyable on the record.

So, really, The Human Contradiction is a pleasant surprise. It's an engaging listen, and it doesn't grow old quickly--for better or for worse, the hooks let you know that it's here to stay and that it won't be shaken off easily. Next to their influences--Nightwish, Epica, and others--Delain appears to forging their own path and, for The Human Contradiction and subsequent albums, that's a mighty good thing. Can't wait to see what's in store for the future.

P.S. The choice of guest vocalists on the album rules.