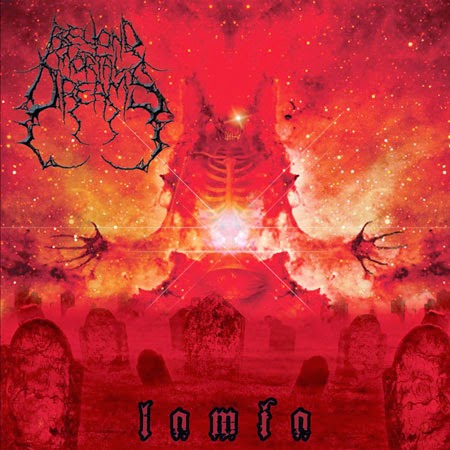 Two years ago, Beyond Mortal Dreams gave us an EP called Dreaming Death, and in 2014, they return with yet another, albeit in a much more concise fashion. Entitled Lamia, the two-track release is a blast for the first few listens, but because it appears polished and rounded around the edges in comparison with its predecessor, it feels a bit synthetic.

...and as any dedicated death metal fan knows, that's never a good thing.

At times, Lamia's resemblance to Hour of Penance is uncanny, and the plastic production constantly reinforces that. As a result, there's little new to hear here, and if you've already crossed Hour of Penance of your listening list, you're likely to tire of Beyond Mortal Dreams quickly. But not all is lost; the musicianship is top notch, just as one would expect of death metal with a technical edge, and the energy is clearly there--it's just that comparisons to Hour of Penance are inevitable and the vocals, which are relatively weak as far as death metal goes, don't do the music any favors.

So, what's the final word? Well, Lamia is worth at least a handful of spins, especially if one is a death metal fanatic, but other than that, there's not much to get excited about. It's all fine and dandy to worship your idols every now and then, but Hour of Penance's musical template isn't particularly interesting anymore and makes Lamia seem like an album in search of an identity.

Words of advice? Mix up your sound, boys. You'll be a better band for it.