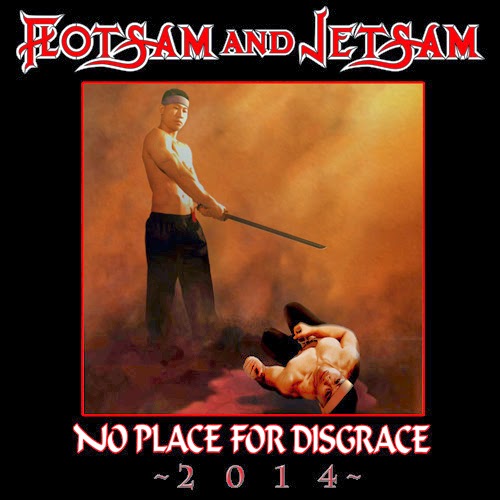 Six years ago, Sodom made the decision to rerecord their first EP, In the Sign of Evil (in addition to unveiling a handful of new tracks). Fans scoffed, sneered, and jeered at the idea, but given the history of poorly rerecorded music, they had every right to be skeptical that the final product would come within close proximity of the original. No matter how perfect the material is, the original, in the eyes of the existing fan base, is superior. See reviews on Metal Archives as proof.

Fast forward to 2014. Last month, Flotsam and Jetsam served up a refreshed version of their perennial classic, No Place for Disgrace, a record that enjoys status as their best album even today. As the story goes, over the years, fans clamored for a remixed version of the record, but because the original master tapes weren't easily obtainable, Flotsam and Jetsam chose to rerecord the music. And that's when trouble in paradise set in. Common sense points out that No Place for Disgrace was released almost 26 years ago, and time is, unfortunately, rather revealing in what it can do to musicians. In this case, it's not so much the instruments but instead Eric A.K.'s vocals, which sound tired and lack the range he enjoyed at the height of his career. It's one thing to rerecord material when you possess the chops to match your previous performance; it's the other when you simply can't perform as you could in the past. Sometimes it's best to sit back and consider what you can and can't do.

Often times, a situation like this tarnishes a band's reputation, to the point that fans swear off future releases. But, fortunately, Flotsam and Jetsam still sounds solid instrumentally, even though the modern production does the guitars, drums, and bass no favors. Aside from the vocals, the fundamental issue with No Place for Disgrace - 2014 is polished music that lacks power in comparison with the original. Because the existing fan base subjects the rerecording to so much scrutiny--picking apart every last detail--it's inevitable that the original will be closely compared with the new, and sadly for the powerless 2014 version, the music can't stand well on its own.

Perhaps the most interesting issue with No Place for Disgrace - 2014, however, isn't the music itself but why Flotsam and Jetsam couldn't secure the master tapes to their own music. Looking at current line-up, nearly every member took part on the original, so it's not a question of whether or not it's the same group of musicians; it's simply an issue of rights--rights Flotsam and Jetsam obviously doesn't own, and by creating a new record with rerecorded music, could own.

Au contraire. Flotsam and Jetsam was never hugely popular like contemporaries Metallica and Anthrax, so that rules out the possibility of a down and dirty cash-in. Aside from the crowd that grew up with the music, there's simply not enough evidence that rerecording No Place for Disgrace would be a positive financial blip on Flotsam and Jetsam's radar.

That leaves catering to the fans, or a matter of owning the rights to their music, albeit in newly recorded form. If fans really were begging--because I sure as hell wasn't--for a rerecorded record, then I admire Flotsam and Jetsam more than they'll ever know for listening to their fan base. If it's an issue of rights, I could be persuaded to understand their viewpoint, but to rerecord a classic for the sake of owning the music seems silly. To ruin the legacy created 26 years ago is just downright tasteless, and they would be better off pursuing the rights to their music.

Either way, No Place for Disgrace - 2014 is a very real record, much to my dismay. According to word around the Internet, the music has, surprisingly, been well received, so perhaps the end isn't near for Flotsam and Jetsam. In the future, it wouldn't be a bad idea to stick to writing new material suitable for Eric A.K.'s vocal range, because anything else just feels like a bunch of old men reaching for glory that they're never going to enjoy again.