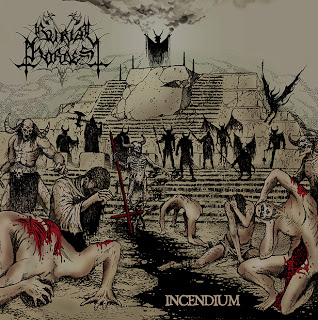 A staple in recent years, Deathspell Omega's influence on modern black metal is essentially unmatched when one begins to consider the number of dissonant, chord-clashing bands currently churning out new music. Burial Hordes is, of course, no exception with their latest offering, Incendium; many times, the material recalls the French act's downright vicious nature and pitch bending aesthetic, but one slight difference surfaces with extended listening: a sprinkling of blackened death metal that stirs the pot and helps to differentiate Burial Hordes from other clones.

Despite the combination of the two sub-genres, Burial Hordes' music is still heavily stepped in the Deathspell Omega blueprint, particularly the earlier era. Looking back to Si Monumentum Requires, Circumspice--arguably one of the most notable black metal albums of the past decade--"Path of Bloodshed's" initial resemblance to "First Prayer" is uncanny, though it may take a careful ear to catch. A few words come to mind when comparing the two: "Homage?" Rip-off?" "Tribute?" Describing the similarities can be tough, but for the sake of giving Burial Hordes benefit of the doubt, unintentional is a better choice.

Two songs later in the track listing reveals a piece so staggering in its similarity to Deathspell Omega that the repeat button is needed for verification purposes--"Scorned (Aokigahara)," as Burial Hordes calls it, wouldn't sound out of place on Si Monumentum Requires, Circumspice, with its grave opening and Gregorian choir. If "Carnal Malefactor" and "Epiklesis II (taken from Paracletus) had a baby, "Scorned" would be it. Clearly, the resemblance is more than skin deep.

Pointing out that the notes and chords aren't the same is the easy way to avoid scrutiny. Of course they differ, because no one can get away with a straight rip-off, stolen riff, or pilfered melody. The main complaint here is the lack of originality and imagination, two traits all too scarce in contemporary metal. Each member of Burial Hordes obviously has talent because emulating Deathspell Omega requires instrumental chops, but to see such skill wasted on worship is a sad sight, indeed.

With all that said, though, Incendium is generally quite good for a record devoid of individuality and a fresh outlook on music. The riffs are interesting, the vocals, forgoing the traditional black metal rasp, dip deeply into death metal territory, and the musicianship is a step above many of Burial Hordes' peers. And, to top things off, the band comes from a country that, despite having a history of quality music, is little known for metal, aside from big names like Septic Flesh, Rotting Christ, and Varathron.

In a nutshell, this reviewer is incredibly torn. Incendium is hugely playable and stands well on its own as an enjoyable album, but comparison to Deathspell Omega is, unfortunately, inevitable. It's as if Burial Hordes entered the studio, turned on Si Monumentum Requires, Circumspice, and began composing and recording music in one fell swoop. While Incendium will receive playtime, the nagging thought that Deathspell Omega was Burial Hordes' inspiration to the point of near plagiarism won't be easily forgotten.

Incendium is slated for release on January 27th from Hellthrasher Productions.