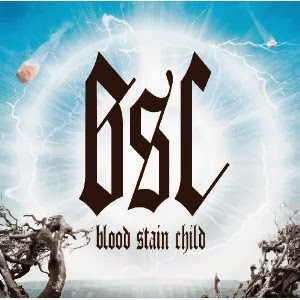 Yep, this band has officially gone down the shitter.

Since losing their previous clean vocalist, Sophia, Blood Stain Child has essentially done a 360 for heavier modern rock with their newest single, Last Stardust. Never mind the fact that the b-side ,"Over the Galaxy," has remnants of Epsilon's fruity trance metal sound; instead, the overwhelming majority of Last Stardust sees the band favor generic song structures devoid of decent guitar riffs and discard much of the uniqueness that set them apart from the crowd in the first place.

Replacement clean vocalist Kiki further sours the experience, and lacks Sophia's recognizable tone and range, too. Her accent tends to be unbearable and nearly impossible to understand, which doesn't do Blood Stain Child any favors. When songs written in English meet a thick accent, any chance of a worldwide audience is considerably lessened, not to mention an enjoyment factor of about zilch.

Although Last Stardust is a single and perhaps not indicative of a future full-length, it doesn't inspire confidence. It's like listening to a bad pop song that you can't get out of your head--sure, it's catchy, but that doesn't automatically mean it's quality music. One of two things should happen here: go back to sounding like At the Gates with keyboards, or look to Epsilon for how to write blistering pop music. Or, you know, have Sophia return to the fold. Sorry, Kiki. You just ain't cutting it.

The only enjoyable thing about this song is the energetic drumming.
Posted by TheMetalAdvisor