The Band Everyone Loves to Forget: Def Leppard 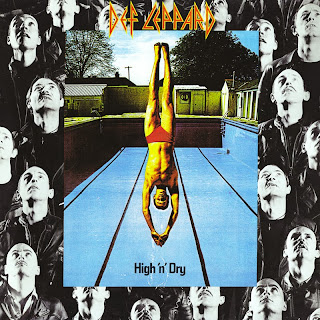 There's no questioning that their first three releases are fantastic records--especially High 'n' Dry--that bridged the gap between hard rock and heavy metal. But here's the thing: after those albums, quality dropped a pretty measurable amount, putting Def Leppard among countless generic, poppy rock bands that found success in the eighties.

Many artists grow hungry for money, hence Def Leppard's change in sound. By 1983's Pyromania, the transformation was nearly complete--with the sugar-coated beast emerging from every corner of the band's music--and they would ride the trend until the pinnacle, 1987's Hysteria. Even so, traces of High 'n' Dry were still fairly prominent in the Pyromania's guitar playing, which is something that was sadly missing from the equation once Hysteria hit shelves. And much to hardcore fans' dismay, post Hysteria's good bits, Def Leppard's work isn't worth talking about, unfortunately.

For me, High 'n' Dry truly is quintessential Def Leppard, and their most consistent record to date. It handily tops the debut and smashes each following release with ease, proving that the British five-piece was able to commit some semblance of quality to recording, even if their overall career doesn't hint at it. Successive efforts, in comparison, feel like nothing more than an attempt to appeal to a wider fanbase and, while decent tracks occasionally surface, they're not anything to jump up and down about.

Really, Def Leppard died around 1983. Their upward climb came crashing down after Pyromania's release, when the raw power found on the first two albums was set aside in favor of infectious hooks in interest of attracting new fans, instead of catering to the existing fan base. The brilliant songwriting--perhaps the very reason to listen to Def Leppard--was simplified as much as possible to appeal to as many as possible. What a shame. Too bad Def Leppard went soft.