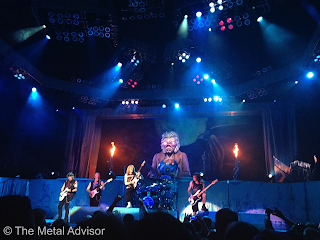 On this leg of the Maiden England tour, Iron Maiden skipped Chicago on their trek around the United States and touched base in St. Louis. The choice was puzzling to say the least, but I happily made the four-hour drive from central Indiana to see my favorite band because they're worth every bit of money put toward gas and more.

Because it was my sixth time seeing Iron Maiden, I knew what to expect in a live setting. Their shows are always a bombastic affair--fire spurts, devil figures, and behemoth-sized Eddies lumbering around the stage--but the music and passionate performance is typically what pulls me in, doesn't let go, and keeps me immersed for nearly two hours. The crowd has a lot to do with that, of course, and the way Bruce and Steve, in particular, interact with the audience shows a genuine interest in the fans.

Like Maiden's stop in Indianapolis last year, they had an excellent support almost every fan acknowledged as an ideal match: Megadeth. Standing outside the venue two hours before doors opened seemed to prove that, too, with a stronger representation for Megadeth than expected, with everything from Rust in Peace t-shirts to flags coloring the crowd. Even so, the majority was still there to see Iron Maiden. After all, there's a reason Britain's favorite metal band is headlining the current tour--their live show is fantastic and generally unparalleled in the metal world.

The merch booths were positively bustling and, similar to when I saw Black Sabbath in August, proudly displaying t-shirts at $40 each. Never in a million years do I wear memorabilia purchased at concerts, so my closet is teeming with black t-shirts that I keep pristine and new looking. I promised myself I wouldn't buy one, either, but I ultimately succumbed, picking a 2013 Maiden England shirt displaying the "Aces High" and "Tailgunner" Eddies ready for a dogfight.

After about an hour of waiting inside the arena, Mustaine emerged from side-stage armed with his signature Dean guitar. The invariable Broderick followed--bursting with smiles and charisma--while veteran Ellefson trotted out, taking careful note of the crowd. While the venue was nowhere as packed as it would be for Iron Maiden, a very respectable turnout still gathered for a very classic setlist.

Megadeth kicked things off with a track from the Rust in Peace era, "Hangar 18," which energized the audience with effortless guitar soloing and instrumental proficiency. The remainder of the roster was just as good; aside from "Kingmaker," golden cuts were played galore, of which my favorite was "Tornado of Souls." Of course, "In My Darkest Hour," "Symphony of Destruction," "Wake Up Dead," and "Peace Sells" ravaged ears and took no prisoners, but the former felt exhilarating. And let's not forget Mustaine's quirky vocals with "Sweating Bullets." How iconic. 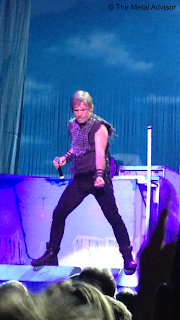 Following Megadeth's exit bow, Iron Maiden's set change was fairly fast for a band of such massive caliber. With a stage as intricate and detailed as theirs, I expected at least 45 minutes, but the switch was swift, proficient, and refreshing. Maiden were apparently ready to blast off.

Once Iron Maiden appeared on stage after playing UFO's "Doctor Doctor," I was as excited as I had ever been. There's something so magical about seeing your favorite band live, and one that puts on a consistent show following countless nights of playing the same songs over and over. There aren't many acts that can claim to work a crowd like Bruce Dickinson, and the suggestion that Megadeth would best Iron Maiden in performance was slimmer than a Slim Jim.

Steve's textured bass clanking, Bruce's humorous stage antics, and the Adrian/Dave/Janick triple guitar attack were in full force, as any fan knows when purchasing Iron Maiden tickets. Nicko faithfully pounded away, improvising and mixing up the studio recordings, too. As far as I'm concerned, Maiden will never make a noticeable misstep, error, or mistake during their performances. Their skill is truly something to behold, and one of the reasons I love them as much as I do. Finding a live personality is a trait many artists struggle to locate, and Maiden has it in spades, gleaned through experience and a need for perfection. 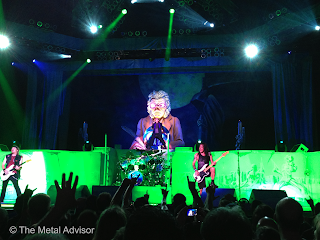 Like last year, "Moonchild" opened the concert, with its pulsing synth line and Seven-Deadly-Sins acoustic intro. Material from Seventh Son of a Seventh Son was strong this time around: "Can I Play with Madness," the title track, "The Clairvoyant," and "The Evil that Men Do" made the cut and are always a real treat to see and hear in person. Although Powerslave and Somewhere in Time are undoutedly my favorite Maiden records, Seventh Son of a Seventh Son is still a wonderful place to pull material from.

The rest of the set was, for lack of a better word, predictable aside from "Afraid to Shoot Strangers." Nonetheless, I never leave disappointed and reconnect with overplayed tracks like "The Trooper" and "Run to the Hills," even if I would have preferred "Sea of Madness" or "Only the Good Die Young" in their place. The fact that Maiden keeps these songs feeling as if they're underplayed speaks strongly of their superb showmanship, and clearly keeps many of us coming back for more.

Ultimately, the setlist was the exact same as last year in Indianapolis--which, looking back on it, isn't surprising considering the Maiden England tour continues to span numerous cities. Still, I loved Iron Maiden as much as previous years and in many ways found the gig to be one of the best concerts I've had the pleasure of attending. Indeed, I don't think they'll ever touch their stop in Indianapolis in 2005 when I was the ripe age of 14, but rest assured they're worth seeing each time they make their way through your area.

Arriving back home at 4 AM leaves me tired as I type this, but, man, am I high off the concert. Aside from the awful sound mix, I have nothing to complain about. See you next time, Iron Maiden. Until you call it a day, I'll see you every tour.