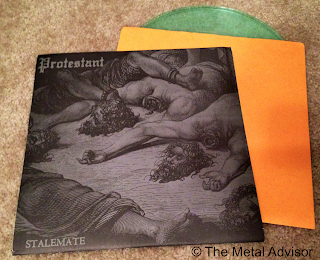 One can't help but be drawn to Stalemate's dark cover-art imagery, curious of the content inside. Like other Protestant releases, the record is a gleaming slab of wax, allowing light to pass through the translucent material each time the album is removed from its jacket.

Different is the size, however; a compact 10" loaded with six tracks, clocking in at just over 21 minutes. Unlike the visually-similar Reclamation, Stalemate is smaller and housed in a thin sleeve, instead of a thick jacket normally associated with vinyl. This eliminates the need for a loose paper sheet, and both sides of the sleeve are used to reveal the record's backstory, as well as lyrics.

Being limited to 1,050 copies spread across two pressings, Stalemate is a special release, and one deserving of more than a passing look. Thanks to differences in color (or lack thereof), telling the two editions apart is a cinch--the first's deeply-shaded black recalls vinyl's glory days, while the second's gorgeous, clear sparkle caters to collectors focused on packaging. 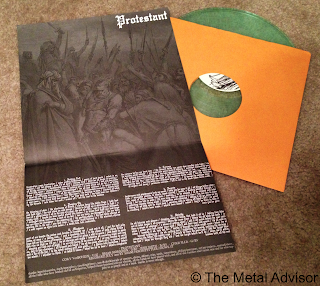 Perhaps unbefitting for the music, Stalemate plays cleanly, and very little surface noise permeates the listening experience. Similar to other small record labels, the wax is cut to perfection and not exceedingly heavy like the typical 180G overkill. Halo of Flies, Protestant's home label, never tries to compensate for poor sound with unnecessary thickness; what you see is what you get, and the finished product is nothing short of glorious.

Each side of the record ties in with the grotesque cover, completing the eery packaging. While the main art depicts decapitated bodies and fallen heroes, labels for side A and B take the theme one step further with a man entranced in pain, and a boar tied to a post as a possible sacrifice. Regardless of personal interpretation, the images paint death as a symbolic force for Stalemate, in lyrics and art.

Placed next Reclamation, visually, Stalemate is the album's little brother, despite surfacing a year earlier. Consistency is part of what makes the presentation so enjoyable; compared with the rest of the Protestant vinyl portfolio, a logical progression links the two and keeps the "lineage" intact. Halo of Flies has done a superb job with Stalemate and, like the music itself, the effort oozes of quality--the best trait of all.