For over 25 years, Xander Demos has wooed the world with his virtuoso guitar playing. In 2012, he released his first full-length record with his band, Xander Demos Band (XBD), to critical acclaim of shred enthusiasts around the globe and currently has a follow-up in the works, with even more scorching instrumental experimentation. The Metal Advisor checks in with Xander to learn more about his discography, and how he intends to carry on for the rest of 2013 and beyond.

Xander, let’s talk about your prominence as a guitarist. You’ve worked with James Rivera, who has done vocals for acts like Helstar and Malice. How has your experience with James been so far?

Xander: It’s really been amazing. James is an incredible guy [and] just a really down to earth person. He owns the stage during shows and it’s a real honor, and pleasure, to be performing next to such a tremendous talent. We did the Warriors of Metal show in Ohio earlier this year, which was his first “official” solo show, and it was just an unreal experience. I look forward to doing some more live shows and working on his solo record coming up very soon. 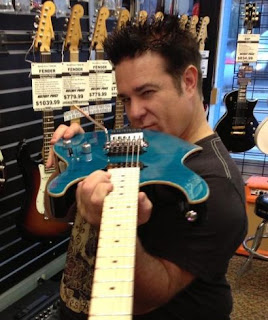 In terms of live performances, you’ve supported UFO, Adrenaline Mob, Lizzy Borden, and others. How would you say this has been beneficial to you? Perhaps promoting your name and guitar playing?

Xander: It has definitely helped in a lot of ways. First, it allows you the opportunity to watch and learn from some of these great acts. There are always things to be learned at shows. Everyone does things just a little differently, and if you can grab something that works from each act you open for, you will be that much further ahead. Second, it puts you in front of their fans. You get to perform in front of hundreds or sometimes thousands of metal fans, who are hungry for good music and a great performance.

If you can get on stage and rock out with them, they are more than likely going to buy your  CD or t-shirt, as well as the headliner’s. We opened for Buckethead in Pittsburgh last year, and we literally sold out of about 50 CDs in just that one night! So, you can definitely connect with more fans in a short period of time by opening shows.

Lastly, it does help to get your name out there and draw some attention, when people see that you’ve shared the stage with some incredible names. It’s like a “guilt by association” thing… if he’s good enough to open for those bands, then he must be pretty good, kind of thing.

You formed your own band, Xander Demos Band (XDB), too. Guitarcadia, your first record, is more or less an album showing off your instrumental chops, am I correct?

Xander: Yes, Guitarcadia is definitely instrumental-heavy. It was the album that I always wanted to make, to just give fans a healthy dose of that shred guitar style. They haven’t really put out any albums like that, since the heyday of Shrapnel.

I think that the album also shows off the chops of my band. Some of the songs really have some intense keyboard parts and the drums are definitely not your average, run of the mill metronome drums. There are also two-vocal tracks, for those who aren’t completely sold on the instrumental metal record.  “Under A Darkened Sky” being one of those, and that’s been a very successful track for us. 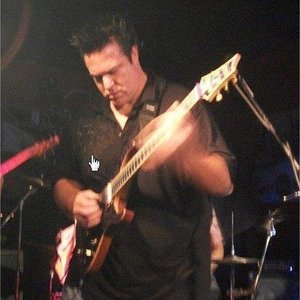 Is it also your first “serious” foray into the music world as a solo artist?

Xander: Yes. It was my first album. The next one will be a little more vocal-oriented. That seems to be the way that the band is moving…and I’m totally fine with that. It will just be more diverse with added textures and layers.

Do you have a track that you’re particularly attached to or would recommend as a good starting point?

Xander: I would have to say “Right Angles,” the first track on the album, is a good starting point. The melody is really catchy. I’ve had people say that they can sing along to it, so it kind of worms its way into your brain.

Is there anything you learned during the recording process that will carry over to future releases? Playing techniques, studio lingo—anything is fair game here.

Xander: It’s all about the ProTools (laughs)!. Recording, today, is leaps and bounds easier than it was when I was in garage bands back in the day. You no longer have to get out the four-track and cassettes and bounce your way to a 16-track demo (laughs)! I love recording now. It’s less of a chore and more enjoyable than ever. Techniques for playing in the studio…crank it loud!

If required to describe your EP and full-length in only a few short sentences, how would you answer?

Xander: Road To Guitarcadia is the demo version of some of the songs on Guitarcadia.  It was never meant to stand alone. Both showcase some very melodic, yet technically challenging, guitar playing, surrounded by incredible musicianship and attitude. How’s that? 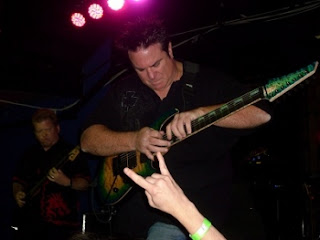 That sounds fantastic! Do you classify your music under a certain subgenre of metal? New listeners will occasionally want a short descriptor of your sound, so they get a “feel” for your music even before digging in!

An instructional DVD is in the works as well. Is that still under wraps, or can you fill us in on the release?

Xander: On hold for now. I’ve just been too busy, to be honest. It takes a lot of time to concentrate on doing an instructional DVD. I will get to it, eventually. When I do it, I want to take the time and do it right.

Do you teach guitar lessons on the side?

Xander: Again, this is a time issue. I have taught for more than 25 years. But, I find myself with less and less time to do it, these days. Skype makes it a little easier to do. It’s just finding the time now.

And for the fun question: who is your favorite guitar player, the one you learned your favorite techniques from and look up to most?

Xander: Tough one! I think that Shawn Lane is probably the quintessential guitar player for me. Great techniques, amazing melodies. But, I have a lot of guitarists that I look up to. Neil Zaza, who is a good friend of mine, is just mind-blowing. Brad Gillis, Neal Schon, Vai, Vandenberg, Sykes, Guthrie Govan…stop me when I’ve listed too many!

Xander: Thanks for taking the time to talk to me. It’s always an honor for someone to take their time to get to know me a little bit better. I really appreciate it. I hope everyone will check out Guitarcadia and help support this, and other musicians, by buying their music.