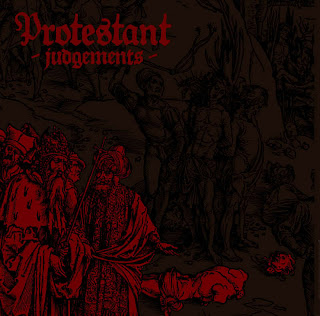 Reclamation, Protestant's latest offering, checks many of the right boxes for crust and metal fans with a black metal aesthetic that encourages destruction, death, and aggression. Best known for a mixture of genres, the sound's peak is Judgements, though, because it builds upon every aforementioned characteristic, but appears primitive and raw in presentation. Likewise, it never gussies itself up for mass consumption and sits at the other end of the spectrum as the opposite of Reclamation's posh polish.

Unlike other hardcore groups, and best seen in crust's prolific clash with black metal, Protestant make the most of their influences, generating intense momentum across Judgement's track listing. Member Cory Von Bohlen, in particular, heads his own record label and welcomes sludge, hardcore, and metal to its roster, so Protestant's pull of influence is no surprise. But classification as crust can certainly be misleading--even if the term is accurate--considering Protestant's eclectic leanings. 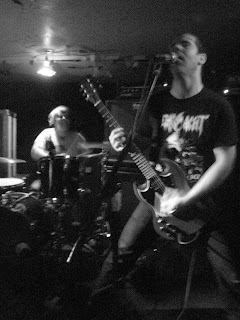 But, really, at the music's core is a relatively simple formula, backed with power chords and vicious rhythms. "Revenge" is only the beginning of the madness with its heavy-handed intro and burst into speedy strumming, while "Deserted" and "Funerals" are Judgement's pinnacle thanks to their memorable guitar riffs. Similarly, "Retirement's" title fits in, too, concluding the record and rounding out a demanding 25-minute run-time. As with other Protestant releases, each track flies by as quickly as it started and makes Judgements easy to spin repeatedly; and that's perhaps the best thing about it: extreme music and accessibility working hand-in-hand.

If the album's short length is any indication, Protestant worked tirelessly to cram so much content into so little time. There's something be said for a band that squeezes tremendous quality into a tight space, especially among other groups that don't offer a different take on material from release-to-release. With blackened overtones on their side, Protestant are one of the better crust acts to emerge in the past decade, and if their current direction is a telltale sign, they'll continue to grow one release at a time.

Judgements is recommended, if only for the wonderful mash-up of styles. While Protestant aren't the first to mix and match, they are easily one of the most enjoyable and deserving of a look because, following a quick listen, not even the pickiest critic will be able to turn away. They're that good, folks.