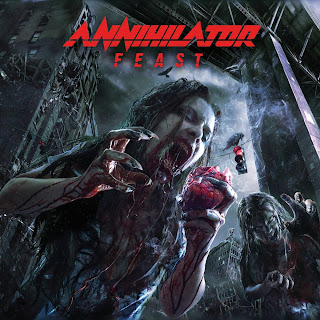 With a lack of consistency only Jeff Waters could love, Feast is yet another ugly duckling in the Annihilator discography. Since Dave Padden's induction in 2003, the band's quirkiness has grown even more outlandish, welcoming pop-like song structures and influences from various musical genres into the mix. Waters' spastic riffing still spearheads the assault, of course, but with other elements at play, the end product tends to feel watered down and like a poor attempt at staying relevant.

Let's be honest; past 1990's excellent Never, Neverland, Annihilator has been a project destined for the landfill, and one distant from the collective metalhead radar. Record-to-record Waters has essentially been the only constant member, and his output reflects that with songs that can't back-up the power they boast through slickly presented instrumentation and a top-of-the-line production. And unfortunately for Feast, its track roster is like every other Annihilator release in recent memory: a mishmash of music that captures little semblance of the now-defunct sound Waters enjoyed in his golden days. After all, musicians can't stay creative forever and, post 1990, the vast majority of the band's offerings are better suited for fans hell-bent on completing their collections.

Feast's most surprising moment is a duo of tracks--"Perfect Angel Eyes" and "One Falls, Two Rise"--that wouldn't sound out of place on modern rock radio. Despite the latter's explosion into furious riffing, both songs' ballad formula sticks like glue and gravitates toward syrupy, memorable chorus lines. Though undeniably catchy, this sugariness just isn't fit for metal in this sort of pseudo-thrashy context. In fact, it sounds better placed among the Nickelbacks, Daughtrys, and Sick Puppies littering mainstream American airwaves; and for Annihilator, that's adding insult to injury. 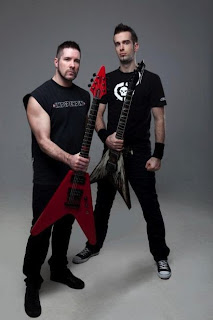 Even so, a handful of songs hint at Annihilator's past glory, though they are a far cry from Alice in Hell and Never, Neverland. Water's guitar playing, best described as an assortment of schizophrenic, pulsing rhythms, acts as the album's only redeeming quality--many of his riffs underpin stale songwriting and save Feast from being entirely forgettable. "No Way Out" appears misplaced from Never, Neverland, and "Deadlock's" opening punches heavily not unlike the Annihilator of old. In theory, Waters and Padden's team efforts should churn out pretty impressive cuts based on their experience, but the result is less than thrilling and yet another stain on their names.

Shining moments are few, far, and between, and Feast is best left to hardcore listeners intent on wading through a pile of shit. In other words, another classic album isn't possible by any stretch of the imagination. Incapable of releasing a consistent record, the Waters-Padden team reeks of mediocrity, awarding Feast the pleasure of sitting near the top of countless worst-of-2013 lists. Sad as that may be--considering Waters' knack for writing intricate guitar work--this isn't 1989, and calling Feast a respectable effort just isn't in the cards. Annihilator is history.