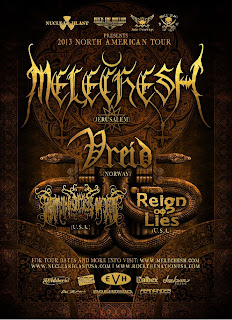 I stood shocked at the attendance level for Vreid and Melechesh: at the concert's peak, 50 or less fans had shown up. The turnout was surprising, considering the following these bands have over the internet, but here's the thing: cyberspace is far from reality and often what's popular on message boards and music databases doesn't translate into real life. Oddly enough, I was okay with that because I easily grabbed a center position and happily soaked up every note the headliners belted out over the duration of the night.

That being said, I generally detest standing at the front because, not only is the sound muddy, but is it also less optimal for listening. In this particular instance, however, that was not my concern, as I was interested in seeing the two perform since they were purportedly masters in a live setting. The other three bands--Withering Soul, Reign of Fire, and Lighting Swords of Death--would be like icing on the proverbial cake if they were decent.

As I braced myself for the coming onslaught, I moseyed over to the half set-up merch booth and looked over a vast array of tees, vinyl, cassettes, and CDs. Being the massive Vreid fan that I am, I decided to nab a Welcome Farewell shirt and Vreid Goddamnit concert that is grossly overpriced on Amazon and, better yet, playable in United States-coded DVD players. Much to my dismay, patches and other memorabilia from bands not even performing would later appear at the booth. I definitely missed out, but I suppose that's what the internet is for.

But back to the show: Prior the concert, my friends and I had a quick exchange with Withering Soul's drummer, which made seeing them enoyable, if only for the fact that he presented himself as a likable guy. I must admit that had we not had that brief interaction, I probably would have written them off as a group simply going through the motions; the band showed little emotion, made no attempt to rev up the audience, and failed to genuinely make us interested in their music--essentially throwing a middle finger to the people who had made their way to the front. The worst part, however, was the triggered bass drum, which was too clicky and lacked bottom end. The verdict on Withering Soul was that their musicianship seemed good enough--if not slightly sloppy--but they were in no way the worst of the night.

Reign of Fire appeared next and were band I was skeptical about based on their sound check. Most of their guitar riffs were composed of simplistic, syncopated chugs and painfully boring instrumentation--the song writing wasn't much better, either; and I grew increasingly disgusted through the remainder of their tedious song roster. In recent memory, I haven't seen a group more guilty of combining the laziest elements of metalcore and groove metal, which were good for reving the crowd up and a saving grace, considering their unusual paring with the other bands. To Reign of Fire's credit, they were fantastic performers, but their music was largely hit or miss, with the emphasis being on "miss."

Lighting Swords of Death were poised to save the night, nonetheless, and my friends and I were treated to some "real" black metal right before the main courses were served up. Upon killing the lights, the band disappeared into a thick fog and eerie light show, which was fitting for a group of their style, but didn't give much room for observation on the audience's part. Everyone seemed to know what was coming, and Lightning Swords of Death's entrance signaled what was to take off, as they left the first two's pussy-footing at the bar's front door. I won't claim to be an avid fan because, prior to the show, I had only heard the Los Angeles-based act's name and not a single note of their music, but I'm sure a disc will enter my collection eventually.

I'll shamelessly admit that my sole reason for making the trek to Joliet was Vreid. Starting with Milorg, I became a full-on convert toward the four piece's melodic black metal, and they rapidly climbed the ranks to being one of my favorite bands. I'm happy to report that Norway's finest didn't disappoint, but I was afraid they would fail to meet my expectations with their stiff introduction. Past the first song, thankfully, they loosened up and consciously made an effort to immerse every concertgoer in their music, fan or not.

With little variation between studio and live performance, perhaps Vreid's best quality was their trueness to their albums. I repeatedly caught myself thinking how flawless they sounded, reflecting upon the hours of practice needed make each member seem as one. Although most material was pulled from Welcome Farewell, "Disciplined," in particular, was the highlight because the spiraling ups and downs translated well into a live setting. Seeing the song firmly cemented my opinion that Milorg is the perfect gem in Vreid's discography, and a record you'd be silly not to have in your collection. I would be lying, though, if I didn't mention that "The Reap" is spectacular and excellent at reeling the crowd in.

Vreid's stage presence was naturally very good, and proved that their WWII-inspired garb was perfect for the ocassion and fitting for the lyrical themes. Because each member takes great pride in telling a little-known tale--Norway's resistance to the Nazis during the second world war--the band provided a bombastic interpretation of the struggle for Norwegian survival. And with that said, the pure charisma and force of their material was exceptionally moving to see in person.

Melechesh were the last to play, and supposedly incredible live, but Vreid were more than enough to satisfy me. It was clear most of the crowd had come to see Melechesh, as they congregated toward the front of the stage and excitedly chanted the band's name. Nevertheless, I still held my spot, only to be rudely tapped and pushed upon by a drunk, who gradually grew more annoying during the remainder of the show.

All that aside, Melechesh were wonderful live--particularly their fist-pumping Middle Eastern chants--save for a drummer who repeatedly slipped up throughout their set. More than once, I observed him stop for a split second and then resume: grimace pasted on his face and all. His disgusted look told the whole story, but I'm fairly sure the majority of Melechesh's rabid fan base didn't notice, or care, for that matter.

Of the songs played, I knew a few. The closer, "Rebirth of the Nemesis (Enuma Elish Rewritten)," received the most response, with its fast-paced rhythms and driving guitar riffs, but "Ladders to Sumeria" was arguably the best at achieving the Middle Eastern vibe the act is known for. "Deluge of Delusional Dreams" was also superb--the handful of songs I recognized were from Emissaries, prompting me to pick up Melechesh's most recent and, of course, the rest of their discography.

Despite not being familiar with a staggering amount of material played, taking the three hour drive to Joliet turned out to be worth the expense and effort. Vreid were absolutely killer live, I crossed Melechesh off the bucket list, and Lightning Swords of Death will find a place in my collection, sooner or later. I'd say it was a great night, wouldn't you?  It's certainly one I won't forget.