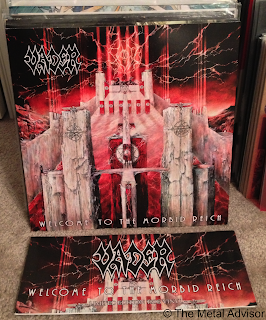 Flashing back to 2011 brings to light all sorts of memories, in particular discovering Welcome to the Morbid Reich, Vader's eleventh full-length and an absolute cracker at that. The record instantly entered my exclusive list of untouchable albums after only one listen, and I was mesmerized for months after, unhealthily addicted and completely obsessed. A metal release hasn't "wowed" me that much since.

A record as fantastic as Welcome to the Morbid Reich warrants double-dipping into the Vader merch world--in this case adding both the CD and the vinyl to the collection. The vinyl is a particularly gorgeous affair whether you opt for the traditional black or succulent red; red obviously suits the album better, considering it's swathed in detailed, bloody-looking artwork, but the black beckoned to me more, being easier to find. As far as each pressing goes, neither were intended for U.S. buyers, but I managed to snap one up just in the knick of time before they were completely sold out, hidden in collections across the globe.


As expected, the cover benefits from the enlarged surface area of a jacket. Vader's choice of artwork couldn't have been more perfect because, in an age where computer-generated images reign supreme, Welcome to the Morbid Reich looks hand-drawn and gives off a nice early ninties death metal vibe. Flipping to the back only sweetens the deal--a special gatefold opens to reveal additional art, lyrics, and a drool-worthy poster that I intend to get framed in the near future.

The wax itself is a generously-cut 180G, which is likely thicker than it needs to be, but still satisfying to hold between the hands. Interestingly enough, the slipcase housing the vinyl appears to have a tissue paper-like consistency that I've never encountered on another release. Perhaps this was intended to protect the record without the possibility of scratches. Regardless, it's a nice touch and may be what I choose to replace sleeves on my older records.

Thinking back, adding Welcome to the Morbid Reich to my collection was a no-brainer. It acted as the starting point for a life-long love affair with a group of Polish metallers, who produce the most consistent music in the business and rarely second guess what they commit to recording. Because of that, I had no trouble spending the $20 admission price to enter the club. After all, this is quite possibly the release of the decade, and Vader's best album to date.