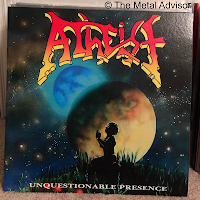 Stepping into Chicago's Reckless Records often results in a treasure or two following me home. This time, Season of Mist's recent vinyl reissue of Atheist's Unquestionable Presence was the lucky winner and, despite being colored, not a purchase I regret. The pigment is astounding, with the transparent yellow a piercing glow against the usual boring drab, and easily among the most beautiful hues in my collection.

Unquestionable Presence is a record that, in my opinion, has long deserved a renewed spotlight showcasing its influence and place on metal's timeline. Season of Mist seemed to agree as well because, while the reissue is certainly plain, it offers a bare bones type of feeling that vinyl had in its heyday (and I suppose the early '90s, too, which was Atheist's heyday). I tend to appreciate things like that, considering the record's label is printed in traditional-looking text. How refreshing!

The packaging itself is in much the same vein, and the message noting Roger Patterson's passing is a very nice touch. I typically have a few suggestions or "complaints" about nearly every vinyl release, but this time I'm fresh out of words. The presentation is just so reminiscent of the old days--minus the extreme color choice--that I can't find a single fault and instead choose to enjoy the record as it is.