An avid fan since high school, I jumped at the opportunity to interview Jake Superchi of Ceremonial Castings, a renown black metal band from Washington. The act commonly refers to their synth-laden music as "Bewitching Black Metal," which is all too fitting for their witch-obsessed and dark lyrical themes. The Metal Advisor catches Jake for a quick Q&A to uncover the upcoming few releases, as well as dig into the mind of an incredible composer. 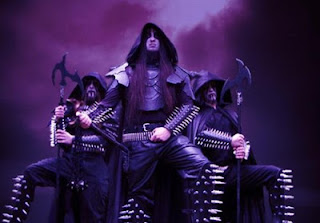 If you had to recommend one record from the Ceremonial Castings discography to a new listener what would it be? Why?

Jake: Hrm... That is hard to say, really. I think all our albums are different in some ways. I always recommend Salem 1692 because I think it is musically our best representation. It also has a lot of personal connection from our family bloodline, so it really does have an importance to myself and OldNick.

What is the story behind the Lord Serpent, OldNick, and Bloodhammer aliases?

Jake: I won't get into too much detail about this, or break down each name to explain them. But they all represent an "inner-devil" of ourselves.

I stumbled upon Ceremonial Castings’ music through Metal-Archives (around 2007-ish) because it seemed to have a cult-like following on the forum. Do you think online communities have helped contribute to your success?

Jake: For sure. I believe over the years a lot of online communities have really jump started our career. If it wasn't for the internet there would be no way we could have got our music to this many people in so many different countries without the help of a label, management, and agents. We've been very fortunate to be able to go this far all on our own thus far.

Jake: Yes and no would be the right answer. I've always believe that this band could go very far and make an impact around the world. It is this belief that keeps us striving and pushing forward. 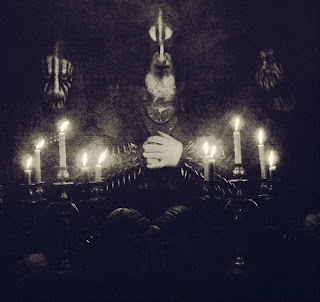 For instance, you seem to have a large following in South America. What are the fans like there? Are they different than Europe or the United States?

Jake: I think so. It seems they are more appreciative. I don't think they get spoiled like Europe and the USA are. They don't get as many crazy tours like the other countries do, so when it does happen it's probably a very special thing. I remember in my younger days he excitement I had for music and to witness live performances, DVDs and new albums. Unfortunately over time it's all become stale, other than the excitement for my own art.

In terms of full-lengths, 2002-2008 was a very fruitful time, as you cranked out six records. What helped/helps you stay focused enough to write and release music consistently?

Jake: If I had it my way we'd release a new album or two every year. Unfortunately, other members are busy with other things in their lives, and it takes time to create things. I also think the standards of what we release have inclined, so more thought is going into the new record. We also have a few other records that need to be recorded, and I probably have enough material for another album or two. These days I have to slow my writing down so that we can catch up on what we need to finish. I've just always been motivated by creation, especially with music.

Do you find you often have excess material that you need to push to the next record?

Jake: There are always excess riffs that don't get used. I have at least a dozen tab books from over the years just filled with things I've written and jotted down. Tons of stuff I've already used, even more I probably won't use and some just waiting. But like I said, I've slowed down on tabbing/writing so that we can catch up on all the new stuff we need to finish.


You have a Slayer/Jeff Hanneman tribute coming up that will be completely free. Can you talk about that?

Jake: Yes, we are soon to be releasing a five-song tribute to Jeff Hanneman and a dear friend of mine Robert "BJ" Arnette that just recently passed away. It should hopefully be available for download in the next few weeks. 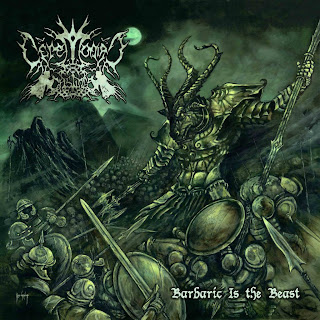 How have Jeff and Slayer influenced you personally?

Jake: When I was growing up and just learning to play guitar, I was really getting out of the hair metal (although I still like some of those bands) and venturing into heavier and darker territories. There were many bands that were huge influences, but I remember borrowing "Reign In Blood" from a friend and thinking, "this is the most evil and insane guitar riffs I've ever heard." The rest is history like all Slayer fans. It then became a conquest to get the rest of their records.

What do you have planned after the tribute? New material, touring—anything is fair game.

Jake: While we are recording the tribute, we are also almost finished recording all the music for our new concept album Cthulhu. Much like Salem 1692 it will be a concept/story album about Cthulhu and the H.P. Lovecraft mythos. I personally think it will be our best work to date. We will be playing the fifth annual Northwestern Black Circle Festival along side many killer acts like VON, Ghoul, Poison Idea, Toxic Holocaust, Satan's Host etc. in August. After that we'll be heading to Australia for a tour in September and October. There are many things planned and in the works on top of all this. We are always thinking ahead and working on something.

What do you think about vinyl? Do you have plans to release your music in the format in the future?

Jake: We'd love to release vinyl at some point. I think we're waiting to see what happens with the new album. We plan to "shop" it out to labels and see if we can find a decent one to release it for us. I think it's time with all that is going on that someone picks us up. We've never shopped a record out before, so I'm interested to see what will come of it.

Barbaric Is the Beast, for example, was limited to 1,000 copies. Was the number related to the pressing run, or did you choose to keep the quantity low?

Jake: We limit all our releases to 1,000 copies right now, so with that being said, albums like Immortal Black Art, Barbaric Is the Beast, and Salem 1692 have been sold out for quite some time. I am sure in time they will be re-released, maybe remastered and hopefully available on vinyl. But again, this will be something we'll wait to do when we are backed by a label that we feel is suited to do this.

Any last words or shout-outs?

Jake: I'd just like to say thanks to you and The Metal Advisor for taking the time to speak with me. Also would like to say thanks to all the Ceremonial supporters over the years. Without them spreading our seed we would not be where we are today. So once again, thanks and stay bewitched!