Music and the Human Mind: A Collection of Thoughts

Just last night, I took it upon myself to introduce a sibling to death metal. Aside from an occasional Korean pop spasm, we don't have a single thing in common in terms of musical taste, and I predicted her reaction would be less than favorable. She asserted that death metal was nothing more than screaming, with the front men frying their vocal chords during each grunt into the microphone. Naturally, I took the opportunity to correct her and to educate her on the vocal style, but I ultimately failed to make the music resonate with her.

That being said, I find myself absolutely fascinated by the way people react to what they don't understand. Take, for example, the countless times I've played abrasive music out loud, only to have friends awkwardly scurry from the room or plead for me to turn said music off. Death metal and black metal--any form of extreme music, really--takes time to dissect; to understand; and to enjoy, unless, of course, you grew up with them from day one. Although I've always been a fan of metal, I vividly remember a time when I was opposed to anything with harsh vocals (Well, harsher than Lemmy of Motörhead) and outright refused to give the music an honest shot.

The first death metal record I ever purchased was Goatwhore's A Haunting Curse in 2006--I salivated over "Alchemy of the Black Sun Cult's" groovy rhythms, the outright terrifying speed of "Bloodletting Upon the Cloven Hoof," and admired "Wear These Scars of Testimony's" incredible song writing. XM Satillite radio--before the unfortunate merger with Sirius, mind you--was a damn near blessing back then and helped me discover a handful of artists I still enjoy to this day. Cruising online forums, specifically those dedicated to Iron Maiden, blessed me with the addition of Cryptopsy's None So Vile, an album that remains a bona-fide classic, though admittedly not a great starting point for someone looking to explore extreme metal. 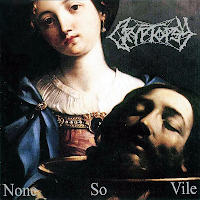 I find myself longing to return to 2006, too, because the innocence I experienced when sticking those albums into my car's CD player was, no joke, one of the best times of my life. The music was fresh, uncharted land that begged for exploration, with every boulder overturned in a effort to glean all that could be gleaned. Nowadays, regardless of subgenre, I've listened to so much metal that I find it genuinely tough to find a band that grabs my interest for an extended period of time. Originality, as they say it, has largely run dry in extreme music with a few isolated cases proving otherwise. I still adore metallic shenanigans, but rarely go out of my way to spin the same album more than once a day.

And now that I think about it, adding A Haunting Curse and None So Vile to my collection proved more invaluable than I ever imagined. They broke down the close-minded barrier I had toward music and eventually led to expansion outside rock/metal for house, jazz, blues, and the current electro/dance-pop trend. People, as a whole, tend to stick with what they know well--in and outside of music--and, as they grow older, shut themselves off to growth and discovery. Years ago, I made a sincere promise that I would never let that happen to myself and, so far, I've been incredibly successful. Since my musical revelation, feeling safe has not been something appealing to me, and sticking to one genre of music has not been an option.

My sibling, on the other hand, will take work. That's not to say I'll try to force a certain genre on her, but I'll continue to play my music when she's with me. Who knows? We may have a blossoming metal fan on our hands. ...or, based on her level of receptiveness, a Korean pop fanatic.