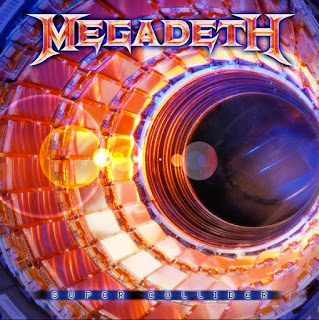 Super Collider meets just about every requirement for a barely passable release: predictable song structures, subpar vocals, and uninspired instrumentation. Like Th1rt3en, the album is essentially a collection of forgettable B-sides that, when used in the record-writing process, make for an incredibly lifeless listen and continue to further tarnish Megadeth's name. Mustaine's warped idea of what constitutes a decent piece of music makes this no surprise, however, and only one or two tracks stay "sticky" after initial listens. Quite a shame, if you ask me.

Super Collider's biggest problem is its unwillingness to step outside the box, to experiment, and to bring new concepts to the table. Endgame, while not fantastic, proved Megadeth still had the adeptness to write a respectable album, but with Eleffson's return to the fold--and starting with Th1rt3een--the band fell back into a slump, releasing rehash after rehash. In execution, Super Collider feels eerily like Th1rt3en 2.0, which was perhaps not what Mustaine intended, but instead subconsciously created, as habits will be habits.

Although never virtuoso in quality, Mustaine's vocals remain the most offensive part of the record because he traverses the rocky slope between vocalist and musical has-been. At this point in his career, it would be best for Dave to commit solely to touring or to hire a full-time vocalist to take over his duties. But because Megadeth has been his vehicle for 30 odd years, the likelihood of such a change is slim, if possible at all. Fans will reluctantly have to deal with Mustaine's deteriorating vocal abilities and lack of creativity as a songwriter--something that has plagued the majority of the act's releases since 1997's dreadful Cryptic Writings. 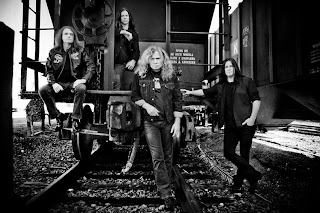 A sliver of light keeps spirits up, however. The second half of "Dance in the Rain" sounds like something not too far removed from Killing is my Business... and Business is Good!, creating a puzzling lull in the track listing. If Mustaine made the effort to revisit the glory days once, why must the remainder of Super Collider vary so much in quality? Likewise, "The Blackest Crow" features a Risk-esque, banjo intro that sits as a cracking eye-opener among the rest of the album. With the exception of those two songs, even the most forgiving listener will find the record an arid wasteland fit for mainstream rock radio (see "Forget to Remember," for instance), which is clearly not ideal for an album with Megadeth tacked proudly on the front.

Predictably, though, Megadeth play it safe with their most recent release, but only occasionally reveal the beast hiding within, should Mustaine let the rest of the band unleash their full potential. For better or for worse, Super Collider is the blandest record the four-piece has released in ages--handily topping Th1r3en in that respect--and song writing suffers horribly, giving off the perception that Mustaine is out for a quick cash grab. He may very well be, but, more often than not, big bucks and an exceptional album do not go hand-in-hand.