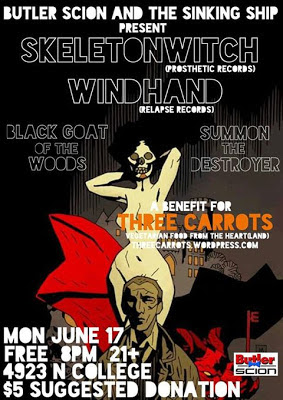 Since discovering Skeletonwitch seven years ago, I've missed their black sorcery every time they've made their way through Indianapolis. Much to my dismay, I usually space on tour dates and curse my mistake until they visit Indy again--until I notice, of course, that I've forgotten yet another concert, yet another time.


That wasn't the case yesterday evening. A day before, a good friend informed me that Skeletonwitch would be offering up their fire-breathing brand of metal in Indianapolis and, best of all, the show was completely free. Naturally, I threw on Worship the Witch, Beyond the Permafrost, Breathing the Fire, and Forever Abomination and hoped the Ohio-based act would be as great live as their fan base claimed they were.

Upon arriving at the modest bar Skeletonwitch were stationed to play at, I realized it was in no way suitable for a metal gig. In fact, when I took a gander at the venue's website, I noticed very few bands, if any, had made their way through the lounge-like tavern in the past. The Sinking Ship, as they call it, was woefully under-equipped for something as hectic as a metal concert, and the delays, minor inconveniences, and lack of space between sets reflected that.

Before Skeletonwitch hit the stage, however, I noticed three bands were selected as openers. I recognized them, save for Black Goat of the Woods, who, quite frankly, should pack up and end music all together--the five-piece played a decidedly eclectic blend of black metal and grindcore with doomier moments, but the song writing was atrocious and the musicianship far below average in comparison to the other wizards who would be displaying their prowess. And don't even get me started on the vocalist. He's the one that really needs to find another calling.

Thankfully, Black Goat of the Woods were second, so at least they were sandwiched between a crop of competent musicians. After my buddy and I had been waiting for close to half-an-hour, a local band (and the first), Summon the Destroyer, let loose what was arguably the most extreme sonic assault of the night, a nice balance between simplistic and technical death metal riffs. I found myself enjoying the music subconsciously, only to scoff at an incredibly sloppy vocalist who made it a point to constantly promote the merchandise they had brought along for purchase. And like icing on the cake, he and a rowdy concert-goer demanded a mosh-pit when a skeptical audience clearly refused to buy into their physical proposal. Just some advice: let the crowd decide if they like your music (or not!) before you position yourself on a high horse.

The third act to step up to the plate was Windhand, one that my friend and I were already familiar with. We left disappointed, however, not because they played poorly but because their level of enthusiasm was just about zilch. Dorthia Cottrell opted to stand in the middle of audience, rather than take place on stage, which turned out to be a total mood-killer in terms of overall enjoyment. Her reverb-laden vocals were like the final nail in the coffin and failed to mesh with what was otherwise a crushing, Pallbearer-like performance; at the end of the day, Windhand had practically zero presence, which I'm finding is typical of doom metal bands, but at least they're decent on recording.

Skeletonwitch finally joined the party after a thirty-minute delay, and we praised the lord for every second we heard them unleash their meticulous craft. Next to the other three bands, the 'witch understood what made the audience tick; what pumped us up; and what got us excited. Garnette and company's professionalism was incredible and indicated a real love for the music they brought to Indianapolis on their own dime. Because the show was free, it would have been reasonable to expect a less than stellar performance. Nevertheless, Skeletonwitch tore up the place instead, genuinely enjoying a particularly receptive crowd.

What really struck me was how good material from Beyond the Permafrost sounded. At no fault of the band, the venue's sound was hastily done--with even Skeletonwitch noting the issue--but, in the end, it fit each song perfectly because Beyond the Permafrost is relatively uneven around the edges. Although a relative newcomer to the band's music, my friend even commented that it was "just like listening to the album," which is something that, after last night, I wholeheartedly agree with. The atmosphere and aura Skeletonwitch emitted was superb and well worth paying for next time they come through your area. 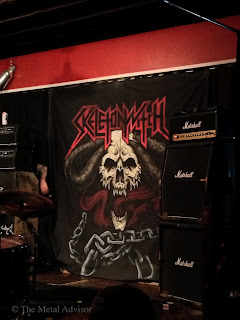 Aside from Beyond the Permafrost, the majority of the material was lifted from Forever Abomination and a few side cuts from Breathing the Fire--which is my favorite Skeletonwitch record and one I'd like to see tracks chosen from more often. The opener, "Submit to the Suffering," was fantastic, and the closer, "Within My Blood" couldn't have been more perfect. Even the new track, "Burned from Bone" fit in seamlessly and really stands as a testament as to how consistent Skeletonwitch are. Come fall-time, and if the act's collective catalog is any indication, we'll have another incredibly well-written album on our hands.

In any case, I walked away extremely satisfied, despite three mediocre opening bands. Skeletonwtich deserve every bit of praise I've seen posted around the web for their stage antics: from shouting obscenities like "Eat Pussy!" to "Smoke Weed!" to "Worship Satan!," Chance Garnette is one heck of a frontman and holds the reigns tightly as he guides the rest of Skeletonwitch on an upward climb to success. Now that I think about it, I've only seen one self-professed music snob proclaim the 'witch as a terrible live band. I can finally tell him otherwise and revel in the fact that I've seen some of my favorite musicians live. They definitely lived up to expectations.

To the cute-looking girl in the polka dot dress, kudos to you for joining the mosh-pit during "Within My Blood." You rock.