The Metal Advisor Interviews Jin Lee of Remnants of the Fallen

I initially planned to prod Jin for a few quotes for the article I'm working on about the Korean metal scene. Upon reading his answers, however, I quickly realized the very idea of an interview dissecting and understanding the Korean music industry was far too interesting to limit to a few snippets here and there. So, here it is: a righteous Q&A with the leader of one of Korea's fastest growing and popular metal bands, Remnants of the Fallen.

Jin and the rest of the crew hope all the rave musings about their second release, Perpetual Immaturity, will continue to propel them to higher ground. I certainly hope so, too, because for an EP early in their career it's quite impressive, with big names like Dan Swano backing the production and overall package. The Metal Advisor talks to Jin to discover Korea's severely lopsided music industry, as well as finding out Remnants of the Fallen's story and how they intend to keep metal's torch burning.

In any case, stay tuned for a write-up and look into South Korea's metal scene. I'm sure we'll be hearing more from Jin and the rest of Remnants of the Fallen along the way, too. 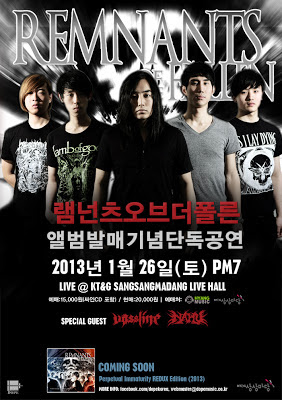 Who is Remnants of the Fallen? What is your music's message, and how did the band form?

Such effort did not go unnoticed, as Remnants of the Fallen soon caused quite a stir in both the underground and mainstream metal scene in Korea, enabling them to play in front of thousands of audiences at various venues and festivals, proving that their technical prowess and addictive guitar lines can mesmerize the hearts and ears of many.

Tell me a little bit about your discography. You have two EPs, as far as I know, and I can't wait to see more!

Jin: The first EP came out in 2010, which only contained "Sea Beast" and "This World Fades." It was primarily a self-financed album, with a focus on introducing ourselves in the metal community in Korea. Remnants of the Fallen’s latest EP album, Perpetual Immaturity (Redux), was released on January 28th, 2013. This time around, Remnants of the Fallen has sought for musical guidance and technical genius from a Swedish metal mastermind, Dan Swano, who was more than happy to spearhead the album’s entire mastering process. The album also features artwork from Gustavo Sazes (Arch Enemy, Angra, Nightrage), who shared his artistic vision with the band. The seven track EP encompasses the band’s past, present, and future musical aim, which is to be heavier, faster, and more melodic than any other one would find within the genre.

Who influenced you most? Korean metal bands or American, European, etc. bands? I always find it fascinating to see who influenced whom and from where these bands originate. Metal is truly a global music, no doubt about it.

Jin: We are mostly influenced by artists from Europe and America, mainly those who play melodic death metal and metalcore. Regarding our European influence, we are influenced mostly by bands from the Scandinavian region, which is also the birthplace of melodic death metal. On our official Facebook page, our influences include: Amon Amarth, As I Lay Dying, At The Gates, The Black Dahlia Murder, Dark Tranquillity, Darkest Hour, Insomnium, Kalmah, Mors Principium Est, and Omnium Gatherum.

Korea has a pretty damn wacky musical hierarchy--give me a general description of the music industry, please. Is it primarily dominated by pop and electronic music?

Jin: The Korean music industry is heavily dominated by pop or "trendy" music. There are very few musicians who write music or play instruments in the mainstream scene, as it is populated by boy bands and girl bands, such as the well-known Girls' Generation and Big-Bang. Good looks and some kind of choreography are musts for any mainstream Korean artist since music is considered a form of "show" or "performance," with the music itself serving as a platform for these artists to get more exposure on television shows, where actual income is made. This kind of abnormal phenomenon in the music industry is due to the high rate of music piracy in Korea. Korea is one of the first countries where music p2p software flourished. Many teenagers and adults alike consider purchasing CDs and going to concerts as a luxury or an outdated notion.

Is it tough for rock and metal bands to break past the pop barrier in order to get exposure? What have you done to promote your music?

Jin: Strictly speaking, if you don’t have some kind of connection with the broadcasting industry or a corporation, you cannot make a living on musical activity alone in Korea. Many big name bands in Korea regardless of the genre they play (and refuse to or are unable to appear on television) cannot live on the income based on CD sales and concert revenue alone. These hard truths make it very hard for independent and underground musicians in Korea to continue producing their music, especially the metal artists, whose music is already a minor genre in other countries as well. Knowing these hard facts, we challenged ourselves on a band tournament program on T.V. We were given difficult tasks, such as rearranging Korean classic pop songs into metal. Of course, we did not, and expected not to make it to the final stage, as the judges were discontent with the lack of clean singing in our music. But we did get exposure to the general population, many of whom later became metalheads themselves.

What do you think of the big "entertainment" companies (like SM) who control their artists, write their music, and essentially treat them as puppets?

Jin: I personally do not consider those musicians to be genuine musicians. I personally think that any musician should be able to write a song or two on an album that tracks up to 10 songs. But from an entertainment point of view, I consider them to be great entertainers but at the same time feel sorry for them as these "musicians" have to go through harsh training from their companies to appear attractive, dance well, and talk politely in order to make the fans satisfied. 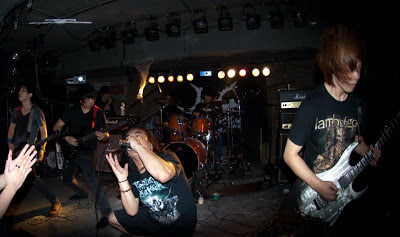 What about the metal scene? Is it mostly underground or are there mainstream bands, too?

Jin: It is 99 percent underground. Even the bands that play mainstream metal, such as nu-metal, cannot make it to the mainstream because it is considered too outspoken for the Korean sentiment. There have been numerous efforts to give spotlight to a certain few metal bands in the past, but the general population turned their back on them.

Do your concerts have large turnouts? Curious to know if the underground comes out of the woodwork to support metal!

Jin: If it is a metal concert, it is usually around 50 to 100, regardless of what band plays. The number is greater with western metal bands, ranging from 200 to 400.

Do you have plans to tour the United States, Europe, and other areas?

Jin: That is obviously our ultimate plan because touring enables artists from the European and American regions to advertise their music, sell merchandise, and gain a larger following. Korea is a small country and touring is almost impossible with such a weak community presence here. Should such opportunity arise, we certainly would like to undertake it.

Let's move to how people perceive Remnants of the Fallen. What is the public perception of your music?

Jin: It is considered heavy--very heavy. There are other bands in Korea that play even heavier form of metal like brutal death metal in Korea. But in the public eye, I think we appear as the most extreme form of music. 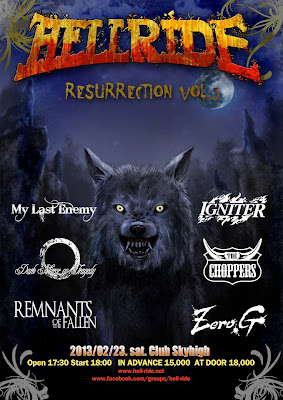 Let's hear a little bit about Hellride Productions. How have they helped you promote your music?

Jin: Hellride is a metal concert organization started by members of Method and Dark Mirror ov Tragedy. Each gig they present has a certain theme from nostalgia to the future of metal. They certainly helped us in advertising ourselves to fans in the metal community by having us play on their gigs.

Are you seeing more metal bands formed as Korea's interest in metal music continues to grow?

Jin: I think Korea’s interest in metal has decreased a lot throughout the last decade or so, but it has been re-ignited with the introduction of new quality metal bands from other countries. Unfortunately, the number of metal bands in Korea is on decline, as older bands are quitting and younger people do not want to play metal anymore.

Would you say there is more interest in metal music today than there was 20 years ago?

Jin: The interest was greater 20 years ago, but that attention is coming back these days with new subgenres being introduced in Korea.

Are Korean heavy metal record labels successful or are they mainly underground?

Jin: Korean heavy metal record labels are primarily underground and they mostly focus on importing CDs. But there have been breakthroughs made with the appearance of a few successful metal bands such as Vassline and Crash.

What label are you currently signed to? Are there any other metal bands on the roster?

Jin: We are currently signed to Dope Music Entertainment. The above mentioned Vassline and the originator of Korean heavy metal, Baek-Doo-San, were on the roster before. Now it consists of Downhell (heavy metal), Au Revoir Michelle (progressive metal), Hollow Jan (post-hardcore), Rux (punk) and Strikers (punk).