Gilian Adam, an iron-fisted, ultrasonic guitarist, stands at the helm of one of Slovenia's most exciting metal bands today. The classic revival sound at its peak, Vigilance is poised to release their first full-length, Queen of the Midnight Fire, which is an excellent adaptation of the NWoBHM movement 30 years ago. Of course, the band included a number of Easter eggs in their music and dark modernity slips in, too. The Metal Advisor talks to Gilian about the upcoming album, and how he and the rest of Vigilance teamed up to unleash one hell of a record.


I've been waiting for new music from my favorite Slovenian metallers for quite some time now! Great to finally interview you!


Gilian: Thank you for the kind words! We appreciate the support!


So, it's been two years since the release of Vigilance's first EP,  Steeds of Time. How has the band progressed since then?

Gilian: I guess we have all sort of evolved and progressed as musicians and songwriters. I think that's the most important thing. I can honestly say we have taken a step towards a more personal sound, and we are really happy with the results. We also work more like a full band now, and we all contribute to the band in different ways, and it feels great. All the experiences we have gained in the meantime are also very valuable, as we have played quite a lot of shows and that really helps you get more professional--you get to see how things work, you know.


Have the band's goals changed? Is Vigilance still primarily focused on a heavy/speed/NWoBHM sound?

Gilian: No, not really. Our goal has always been to play the music we want to hear ourselves and that is still pretty much the case. We do listen to a lot of different types of music, and I think that shows well on the new album. The difference is that the EP was mostly put together from ideas that were in my head for several years, while the new album was written from scratch apart from one track.

In the beginning, everything spontaneously took the NWoBHM/speed metal direction and, in a way,
we are still very much inspired by both genres. But as we jammed the tracks that were to become
the new album, we noticed how we sort of brought in a darker vibe. it was really unintentional, but
we liked it and decided to "ride" that wave of inspiration. And it worked.


And, of course, your first full-length showcasing this more mature sound, Queen of the Midnight Fire, drops on May 14th. Is there a release show scheduled?

Gilian: Yes, we are playing this small club in our home town, which was also used for the EP release.
The show will be held on May 18th and we'll be playing the whole new album live.

Has working with Metal Tank Records been beneficial to Vigilance? How have they helped you promote your name and the record?

Gilian: Metal Tank Records is run by the same guy who used to run Haliaetum Records--Simon. We had a few other offers for the release, but we decided to stick with what we were already familiar with, and I'm sure we did the right thing. Simon does a great job when it comes to promotion, and he takes care of almost all of our graphical stuff like flyers, photo sessions, and everything else.

How would you say the record is different than Vigilance's previous efforts?
Gilian: Well, I'd say it is much more personal, both musically and lyrically. I think the songs are really intense, and there are a lot of details that add to the replay value, hopefully. It's also a very diverse album compared to the EP, as you still get fast songs like "SpeedWave" or "Night Terrors." But the focus here are the more mid-tempo, darker sounding tracks that create the atmosphere of the album.

Personally, what surprised me most was the record's production. It seems slightly rawer than Steeds of Time, and the guitar tone is thinner and more articulate. Did you produce and mix the album yourselves?

Gilian: The album was produced by Rok Zalokar, who also did the Steeds of Time EP. At first, we had the idea to go for the same sound as on the EP, but the songs on the new album are different and, in the end, we went for something that would compliment them and make them sound the right way. The EP was recorded in a very minimalistic way, sort of like we sound "live" and the more "in your face" production worked really great there. The sound on the new album might seem thinner, but there are more things going on; things as overlaying vocals, guitar solos, harmonies, and intense drum work, so it sounds deeper in a different way.


Absolutely--the intricacies on the record all together top your last release! I noticed raspy vocals on "What Lies Beyond...," too. Why did the band decide to experiment with harsh vocals?

Gilian: Well, it's really not a completely new thing for us. I did the vocals on our first demo, so raspy vocals were actually there from the beginning. As it turned out, we didn't use those on the EP, but the new album is full of different themes such as death, drug abuse, personal struggles, self-enlightenment and the occult; and we wanted to create an atmosphere that captures the whole vibe of each song portraying different characters, dialogues, and situations.


Nice album artwork as well. It's a bit mysterious and occult-like. How does it fit with the album's theme?

Gilian: The artwork was done by Mario Lopez, who is a great artist! He really captured the whole concept of the album--all the elements are there. As said before, the album focuses on things like rituals, self enlightenment, personal struggle, and the apocalypse. So, the artwork really works
well with the music.


How long did it take you to write and record the record? Obviously, you've been hard at work since 2011, but when did things start to fall into place?

Gilian: The very first songs were written right after the EP was recorded in the beginning of 2011, but we really kicked it off with "Behind the Cellar Door." That was the first song that gave us the direction of the new album and after that the rest of the album was written really fast. We did a lot of preparations. We constantly recorded rehearsal tapes, listened to them and worked on the songs until we were satisfied with the results. It took us almost five months to record and mix the album, though. But we did gigs in between sessions, and there were a few minor setbacks here and there, so that obviously slowed down the process.

How does a typical writing session go? Is it a one-man affair, or does the entire band pitch in?


Gilian: It used to be more or less a one-man affair, but we work as a full band now. It's really much better this way--we get together and just jam. This is how we usually come up with some of the best ideas. I still do the majority of the riffs, but others come up with their own stuff, so it's not just one-dimensional. That gets boring easily.

Sounds like everything just fell into place. What are you happiest about with Queen of the Midnight Fire?

Gilian: Personally, I'm very happy that we've actually recorded a full-length album. When I started this band three years ago, I had no idea that things were going to go THIS fast. I guess hard work does pay off in the end. Haha!


Do you have a music video or another promotional piece planned for the album?

Gilian: Actually, we have talked about a few ideas . It's still all in our heads and we didn't quite decide about anything particular yet... We'll see how things go on from here.


And only because I'm curious: can you describe your place in the Slovenian metal scene?

Gilian: The Slovenian metal scene is really good, despite its rather small size. There are a lot of great bands and dedicated fans that go to shows and buy merchandise to support their favorite artists. We have built a rather sturdy fan base in these three years, so things are really good; we get a lot of support from the fans and the underground media.


Well, damn. I guess I'm the underground media, too! Any last words or shoutouts? Thanks for taking the time to answer a few questions!

Gilian: Thank you for the invitation and all the support! It's always a pleasure! Keep up the good work! Cheers! 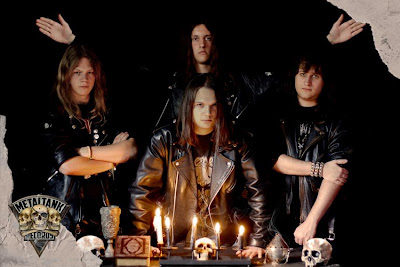