Suffocation Not Giving it Their All? 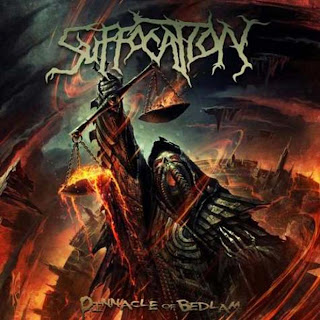 After trolling Amazon's search box looking to buy Suffocation's latest on vinyl, I noticed a particularly intriguing comment and one someone could have only pulled out of their ass:

"Derek and Terrance seem to be really into the music, while Guy and Dave just seem to be along for the ride and having fun. Frank gets the job done, but he seems to be doing it out of obligation."

I sat puzzled, of course, at what I had just read. Even more stirring was that three "reviewers" had made similar statements, all with the implication that post 2004 Suffocation was a reunion just for the sake of a reunion. In other words, all natural love and gravitation toward music was gone. Zip. Zilch. Nada. Dull, soulless death metal for the masses (how ironic) and an attempt at riding the veteran band revival trend. Don't get me wrong; everyone is certainly entitled to their opinion, but how do you surmise Frank's consummate growling is done out of "obligation?" Does that even make any sense? It's like Bruce and Adrian rejoining Maiden for Brave New World simply to go through the motions and leave the studio shrugging their shoulders, discarding the fact that they were integral to one of the most influential metal bands of all time.

That's what I got out of the assertion at least, despite not being the most dedicated and knowledgeable Suffocation fan. To be honest, I've been purposely ignoring the band for the better part of my metal tenure because I was far more interested in Immolation, Diskord, and other names that registered off the "mainstream" radar and brought something "different" to the table. Although Guy and Terrance are indeed innovators with palm-muted, winding guitar riffs, it's been done to death and bores me far more than it should. Pierced from Within and Effigy of the Forgotten are classics in every sense of the word, with incredible artwork, but it's taken me all twenty-two years of my life to give them a chance and, ultimately, a listen.

The point is that people will find creative ways to bitch about newer releases from their favorite bands. I'm guilty of it, too, especially when I look back to The Final Frontier and the overly long, superfluous song structures that seem to last for days. Never once did I accuse anyone in Maiden for putting in a light-hearted performance, however, because that's downright ridiculous and a clear sign of bias against modern material. Only in rare cases will a musician waltz into the studio and give anything less than their best, and Pinnacle of Bedlam isn't one of those times. Metalheads would have you think otherwise, but the music is just as much about personal enjoyment as it is having a level-head and taking the craft seriously. There aren't many reasons to spend countless hours writing and recording an album, unless the band is full of pompous, self-absorbed musicians like Liturgy, but that's another post for another time.

Legitimate criticisms like the overproduced aura that constantly ensnares metal bands nowadays and an over-reliance on blast beats are less absurd. Music is entirely subjective after all, and those characteristics aren't for everyone, especially fans drooling for the crunchy, properly-produced Suffocation records of the early and mid-nineties. I, too, find myself in line with the brick-walled productions suck camp, but Pinnacle of Bedlam is still enjoyable with a few truly brain-contorting guitar riffs that gallop, stampede, and showcase unmatchable fretboard dexterity. I have no doubt in my mind that the band is relishing their most recent release and, at the same time, taking their work seriously. Fun and dedication can work hand-in-hand. Metal is one of those places, and Suffocation has the art down to a T.