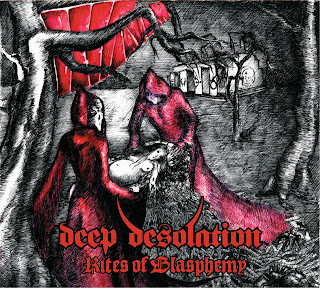 Murky and hateful, Poland's Deep Desolation puncture the line between doom and sludge--effectively overlapping the two--and feel a bit like Electric Wizard in execution. Because black metal-like rasps set these metallers apart from the rest of the crowd, their sophomore full-length, Rites of Blasphemy, wanders farther away from the stale brand of doom popular as of late, especially in the USA and UK. Sadly, the band's songwriting is overly long, tedious, and often a chore to sit through, and splitting the album into two listening sessions isn't uncommon. The guitar riffs border very good to excellent, with solos bluesy and jamming, but none of that matters when the compositions could use a bit of fine-tuning.

The Verdict: As a second release this is a solid choice and a good idea of what to expect from Deep Desolation in the future. Want to wet your taste-buds more? Consider the nearly 10-minute epic, "Between the Tits of a Witch." 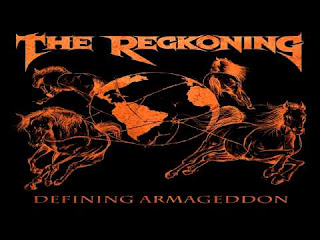 Comprised of one man and his guitar, The Reckoning hails from the United Kingdom as a relatively new project and as the product of years of fretboard wizardry and shredding. With the help of vocalist Rob Lundgren, Ben Higgins, the band's founder and mastermind, pumps each song full of gritty attitude and completes the dream package, barring a drummer. The Reckoning would no doubt improve with a man behind the kit because the music lacks the natural spirit of a well-endowed four-piece and the organic pop and pomp of a real snare drum. Nevertheless, Defining Armageddon is a solid first effort, despite a few shortcomings.