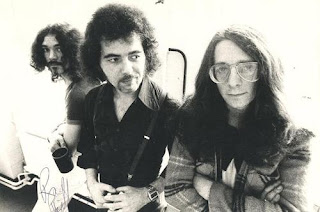 A quick glimpse into the past reminds that Budgie, a seminal rock band, should be fondly remembered alongside acts like Uriah Heep, Led Zeppelin, and Wishbone Ash. They were certainly far more interesting than Led Zep and just about on the same level as Rush, but I often find myself wondering what went wrong; for a band as musically accomplished as they were, their failure to break into the mainstream was surely a case of underexposure and a shoddy record label unaware of what had fallen into its hands.

Just listen to "Breadfan's" thick, meaty basslines and swathing guitar licks. If I had the fortune of living in the seventies, I wouldn't have wanted my music any other way. It's a real shame that, even with a catalog filled with similar tracks, the band didn't spread like wildfire like their contemporaries did.

As far as I'm concerned, there wasn't another act quite like Budgie at the time (at least vocally), and with cover art from the man who penned works like Yes' Relayer, you'd think these Englishmen would have enjoyed immense popularity--both with hard rock fans and prog-heads, regardless of genre preference. It's a bit of a stretch to call the three-piece a metal band, but their influence is unparallelled (if you knew them at all, that is). Give Maiden's "Phantom of the Opera" a spin right after you play "You're the Biggest Thing Since Powdered Milk." You'll make the connection immediately.