Metal Break: Nicolay with the Hot at Nights (Free Music!)

After months of forgetting this ambient jazz group was finely nestled in the depths of my digital music library, I rediscovered them when I stuck all 20,000+ songs on shuffle. I remember how much I like them, too, as their blend of soothing melodies and eccentric drumming is perfect listening for a Sunday afternoon, much like I'm doing right now. Their EP, and as far as I know their only release, holds eight tracks of goodness, with my favorites being "Meiji Shrine" and "Bullet Train."

The act's EP is available free of charge right here. Even if you think you don't like jazz, I'm almost positive you'll find something to like about these guys. 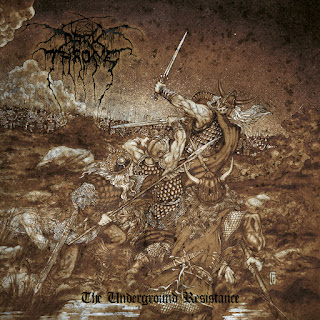 Cover art adorned with a viking warrior, sword raised high and enemies entrenched in warfare screams a certain devotion to classic heavy metal. Cynics might accuse Darkthrone's latest album, The Underground Resistance, of being rehash or a trite attempt at capturing a decade long gone, but the final product is only proof of the two-piece's passion and their willingness to follow their current tastes. Fans angry about the direction of newer records will undoubtedly bitch and whine in protest of the band's latest effort but, for Darkthrone, heavy metal is here to stay and a spirited six-track frolic through a sub-genre ushered by Judas Priest, Venom, and others is nothing to scoff at.

Ghost B.C., formerly known as Ghost, have released a music video for their newest track, "Secular Haze." One of the coolest videos released in the past couple of years I've been blogging, I'm mighty impressed with the direction the Swedes seem to be going in, both musically and visually. In spite of their recent name change, the guys seem stronger than ever, and with a new album around the corner and a tour to support it, I have no doubt we'll continue to see nothing but greatness from this highly controversial act. Love them or hate 'em, there's no arguing that the latest video is slick. More classic throwback, please. Check it out below. 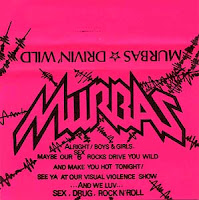 As somewhat of a hidden gem in the rock scene, Murbas, a heavy metal band assembled in the early eighties, never survived musical over saturation typical of any decade. Perhaps closest to the commercial side of Loudness, the five-piece proudly proclaimed themselves as lovers of "Sex, Drugs, and Rock 'n' Roll," separating their music from "serious" metal and instead appealed to multiple crowds at once--both metalheads and conservative listeners too timid to make the transition from hard rock. Unfortunately, Murbas would not last long enough to reap rewards from their work and folded after 1985 with only three demos and one EP to their name. The group's third release, Drivin' Wild, is excellent, however, and gives a small glimpse of progress behind closed doors in the land of the rising sun years before j-pop dominated the industry. 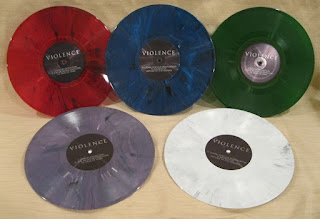 At $10 a pop, Fister's Violence is practically a no brainer and an easy way to begin building a vinyl collection. Late last year, the Saint Louis doom trio announced their partnership with Ohio-based Gogmagogical Records as the label's first release and with a few sweet details: the EP would be available in five colors, limited to 500 copies collectively and 100 per hue. As much as I love vinyl, I normally cringe at the idea of paying over $20 per album, yet alone $50 for five records holding the same exact track listing (in spite of aesthetic differences). But despite my reservations, I scooped up all five and immediately loved the splash of color and unique cover art exclusive to each variation.

Violence's packaging is nominal at best (but made well) and looks a bit like a DIY job, which scores points in my book. Examining the jacket closely, you'll notice the cover art is a simple print job atop bare cardboard that, when placed firmly between the fingers, has a grainy texture and lacks the smooth, glossy coating of a sleeve double or even triple the price. But don't let that deter you: regardless of release, Gogmagogical Record's goal to deliver a quality product in any format still stands here. Really, there's no reason to complain when you have a new album sitting on the turntable. 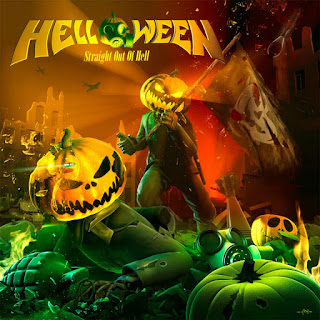 Despite previous records rooted in dark subject matter, Helloween's latest release, Straight Out of Hell, pumps charismatic attitude back into the mix for both cover art and songwriting. The band undoubtedly desires to return to their roots after the opaque 7 Sinners, but the change is astonishingly drastic and recalls the old days when these Germans were developing as an institution--and emerged as one of power metal's great pioneers.

In spite of that, Straight Out of Hell can be a mixed bag. With filler-like numbers taking backseat to stronger ones, the track listing of an inconsistent record places weaker songs near its conclusion and assumes fans might forgive and forget strategically-placed material. Straight Out of Hell sidesteps the practice entirely, however, and creates a black hole in the middle of the roster, making the music feel far more inconsistent than it really is. Sadly enough, the center of an otherwise great product is marred by three poorly written tracks--one of which is hardly a song--and the other two are cheesy in comparison to stronger cuts like "World of War," "Far from the Stars," and "Church Breaks Down."

Pop In and Outside the Mainstream

Despite ranting in the past, I've succumbed to the idea that pop, in any form, is good in small quantities and can work well with metal provided it doesn't become diluted. Not only does the fusion make abrasive music accessible by way of an explosive chorus, but does it also avoid alienating an entire group from potentially walking through the scared gates and becoming full-fledged metal fans. Admittedly, I didn't forge my path into the music world with anything remotely poppy--although what I listened to was certainly melodic--but I certainly won't discourage someone from a hard rock band like Ratt or a hook-laden act like Ghost.

Only in the past two years have I started to appreciate pop for what it is: carefree catchiness fit for background noise at a social gathering, an introduction to music, an addictive high, or a guilty pleasure. Even so, the "genre," however all-encompassing, first and foremost serves purpose as a portal for personal enjoyment. Otherwise, there aren't many reasons to throw something in cassette deck, CD player, or queue up your iTunes--unless, of course, you're set on analyzing a composition for a theory class.