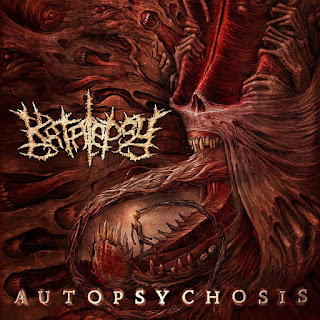 Like a firm punch in the gut, Katalepsy return for the first time in nearly six years with their second full-length, Autopsychosis. For a band that was once rooted in garden variety slam death metal, these Russians make their first foray into the brutal realms of the subgenre, punishing with each riff and stringing together line-after-line of distorted textures. Naturally, the act has opted not to drop their lyrical adaptation of a horror movie's gory imagery, but nonetheless remain a better band, delivering each guttural with finesse and relatively clear, semi-discernible lyrics. The end result is a stab at a coherent product however imperfect it may appear at the seams and kicks 2013 off to a good start--both for death metal and metal in general.

Autopsychosis settles at the top of the heap for January because the way in which the album links changes in tempo and riffs is fascinating, not only from an aural standpoint, but from that of a composer. Brutal death metal tends to gravitate toward assault through a wall of sound, but Katalespy's music has an emotional side as well, providing ups and downs and occasional dynamic change for its 40-minute duration. Compared with the typical band out to destroy eardrums and take no prisoners, the five-piece's compositional skills are a fair bit better, no to mention progressive in nature and polished in songwriting.

Because the band has bettered their overall presentation, the track listing reminds of the quality control introduced since the first record. Each instrument works together to form a crushing assortment of grooving, complex passages that encourage a feeling of raw power, if not a daft perception of craziness unheard outside death metal. As the opener, "Lurking in the Depth" inspires just that, with a transparent bass line and pulsating drums that bludgeon with blast beats and labyrinth-like fills. "Evidence of Near Death (E.N.D.)" begins in much the same manner, but powerfully chugs through every verse, as does "Cold Flesh Citadel," with the introduction of groovy, heavily palm-muted guitar riffs. For the majority of the record, Katalepsy use pinch harmonics to accent certain rhythms and sections of their music, as the latter and "Body Bags for the Gods" demonstrate. 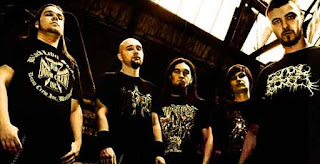 The album's most "brutal" moments have yet to come, however, as "The Pulse of the Somnambulist's" seriously down-tuned guitars indicate: the track's opening trudges like a sloth and takes off in a spitting fury of tremolo picking only death metal's bastard child could love. "Unearthly Urge to Supremacy" follows suit and combines every attribute mentioned previously, while "Gore Conspiracy" deviates by leisurely winding into a thick, gutturally-dominated disarray. By introducing the heaviest riff on the record, "Amongst Phantom Worlds" creates a pitch-bending twist of dissonance that eventually gives way to a tempo-stopping breakdown."Needles of Hypocrisy" provides a much need break in the track listing and prefaces "Knifed Humility's" increasingly more traditional death metal orientation. The closer, "Taedium Vitae," lambastes with midsection discord and takes the crown as the hardest to appreciate on the album.

Notwithstanding all the record's positives, Autopsychosis lacks variation and feels a bit too samey around the edges. Terribly derivative from one another, the track roster blends into itself and can be a chore to enjoy if death metal ranks low in one's personal taste. But, despite that, Katalepsy has brought a furious, hateful album to the table that will surely keep fans occupied for quite some time. Based solely on the band's second effort, 2013 is already off to a fantastic start, with Autopsychosis setting the benchmark accordingly, at least for death metal.