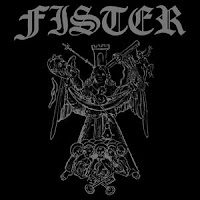 Because I haven't been very good at updating the blog as regularly as I would like, Vinyl Viernes is serving up a double dose of wax this week. Two records have more or less fallen into my hands; the first months ago by way of everyone's favorite record-head, gogmagogical (who was generous enough to gift it to me), and the second a few days ago courtesy of Encore Records in Ann Arbor, Michigan. I like to think of both as a heavy contrast to one another, not just musically, but because one is modern and the other vintage. In other words, The Infernal Paramount is delightfully shimmering and clean sounding, while Motörhead's forgotten attic find is time weathered and reeks of dust.

After spending an excruciating amount of time unwrapping a frustrating, yet well-packaged album, Fister's EP turned out to be the most puzzling piece of wax I'd ever laid eyes on. Because The Infernal Paramount's music only spans enough time to cover one side of the record, the band chose to pour all their resources into a chiseled depiction of a pentagram on the side you shouldn't drop your needle on. For this puppy there is no colorful cover art or thick cardboard sleeve. Exactly what you see is exactly what you get.

Yet the fun doesn't stop there: while Side A holds actual content, the record requires you to play from the inside out, from the end to the beginning. I'm guilty of envisioning a vinyl newbie destroying both the record and the needle when attempting to play Fister's opus and crumpling into a crying mess as one less of these glorious records exists on earth's soil. Nonetheless, I seriously doubt any casual vinyl fan will have a Fister album in their collection, so I reckon collectors are safe.

Motörhead's contribution to Vinyl Viernes is decidedly more traditional, a simple black piece of wax that won't take anyone by surprise. I can't say the record jumped out at me with big "buy me" eyes like Fister's would have if I had the opportunity to purchase it, but, for me, Another Perfect Day remains an essential staple in Motörhead's discography because the album brought much needed change to the band's sound. 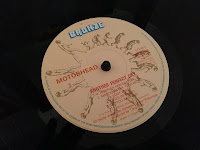 Like Fister's clever innovation in regards to vinyl presentation, Another Perfect Day's liner notes include a humorous comic depicting Brain Robertson's addition to the band, who was largely responsible for Motörhead's musical shift. Small details such as these really pull a package together and make listeners want to purchase physical copies of their music as opposed to illegally downloading or spending hard-earned dollars on something intangible. The enlarged, hurricane-like cover only sweetens the deal further and makes for excellent wall art in your office, music room, or even bedroom.