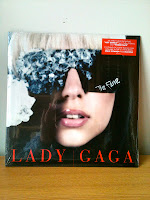 As much as I hate to say it, I enjoy a handful of Lady Gaga songs. My senior year in college has been an eye-opening experience when I think about how much pop music I've been exposed to, with my friends constantly swooning over cookie-cutter song structures and stomach-churning lyrics. Fraternity life yields very few ways around the sugary, memorable, and often sexually-charged mainstream world, and Lady Gaga's music is no exception, especially if parties are a regular occurrence.

Of course, if you're like me and struggle to admit that you enjoy pop, you might consider buying one of the most popular releases of last decade on vinyl to make yourself feel better. There's really no reason to purchase this type of music on wax otherwise, because similar records are, more often than not, quickly and sloppily thrown together for the growing vinyl resurgence. Truth be told, the price isn't all that bad: just under $16 for two records--perhaps a bargain when compared with metal releases that will remain nameless--but nothing to jump up and down about when half or more of the album is shit. 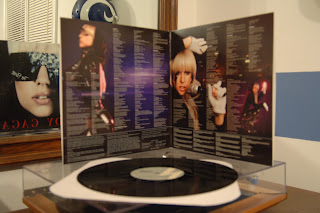 Carefully opening up The Fame's gatefold reveals a diva-like Lady Gaga, tightly leather-clad and holding some sort of glow stick that I assume she fends off her rabid fans with. To be honest, I've never understood the obsession with Gaga as a person; although she does her job admirably well, attempting to set new fashion trends while holding a "bad girl" image, she's still a puppet of the mainstream music industry. It's likely my inner "buzz-off-controlling-record-label" attitude revealing itself, but either way, I'm not buying into the obsessive madness. I'll never be one of the fans who bends over backwards for Lady Gaga. 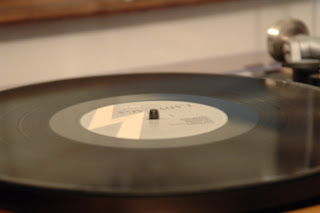 The jacket cleverly incorporates the lyrics, eliminating the need for liner notes but, in turn, leaves the packaging rather bare. Both records are housed in white paper, which will scratch the wax if you're not careful. Undoubtedly the work of different mastering, much of the harshness is missing from each song when compared with the CD, and the music feels natural, while still retaining its inherent digitalness. Though The Fame (or any of Gaga's music, for that matter) will never be analog in recording, I welcome imitation with open arms each time I drop the needle on the table. After all, it is the sincerest form of flattery.

As much as I dislike the majority of this album, my purchase goes down as another welcome addition to the collection. This kind of music is fun on record because you wouldn't expect to carry the latest, trendy pop release in from the store, slap it on the turntable, and sit back and enjoy with a nice glass of German Riesling. Like my colored records, I'm not sure The Fame will get much playtime, but I'll stick it on the shelf and hope it will be worth something as interest in vinyl continues to grow. For now, though, I'm going to keep hitting the repeat button and play "Poker Face" for the foreseeable future. ...er, I meant keep dropping the needle. I swear.


(Video posted for the sake of metal)
Posted by TheMetalAdvisor