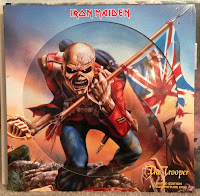 Reissued in two vinyl formats all the way back in 2005, The Trooper found its way into my record collection, not only by 7", but by picture disc as well and added another chapter to my growing Iron Maiden stockpile. I've had both for the better part of seven years and never bothered to throw them on the turntable for fear of distorted and scratchy sound that usually puts me off to these mediums--each record is spotless and mint as can be. Nevertheless, I enjoy looking at the dazzling blue color of the 7" and the classic artwork immortalized on the 12" as a reminder of Maiden's longevity and influence as a metal band.

Intended to promote the Death on the Road album, both records feature the same artwork, yet hold a different track listing. Flipping the azure 7" over yields two songs--one on each side--a concert-captured version of "The Trooper" from 2003 and a live variant of "Another Life" from 2005. Likewise, the picture disc does very much the same thing, featuring the same "Trooper" cut, but tacks on the studio take and a live version of the ever classic "Murders in the Rue Morgue." To be honest, both records are not different enough to justify double-dipping into the Iron Maiden merch kingdom unless you are a mega fan like myself. 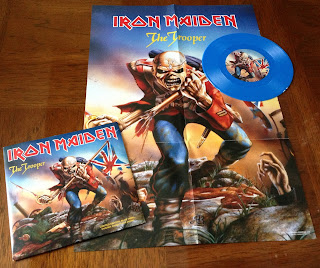 Packaging for the picture disc is unfortunately limited to a hollow cutout that allows the vinyl to peak through, but not all is lost. The 45 includes a wonderfully sleek poster of The Trooper's vintage artwork but with a surprise--the other side advertises the Dance of Death World Tour and exaggerates the computer-generated cheesiness of 2003. The 45's jacket is a plus, too, as many I've handled have thin, paper sleeves that serve the same purpose.

As I understand it, both records were extremely limited in quantity when released. United Kingdom albums only, I remember my excited 15 year old self waiting a month or two for these imports to arrive in my hands in the United States. Although I have never played them and never intend to, I can safely say the wait was worth it and every penny used was well-spent. Up the Irons!