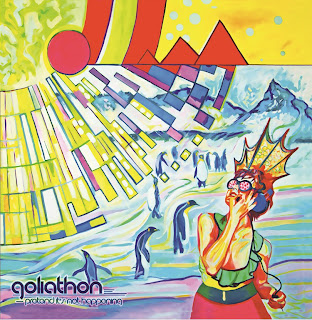 Since the release of their second record, Pretend it's Not Happening, Goliathon have strode across Indianapolis' local scene like a stallion loose from his confines, where most bands are missing the power to position themselves for any sort of success. The album feels almost like a relic of the seventies--progressive rock and occasional proto-metallic riffing dominate the track roster--but the addition of a saxophone keeps listeners on their toes and Goliathon unique relative to the competition. Much like the debut, fluid melodies weave in and out between one another, and the band's application of the Hammond organ acts as a throwback to times when music was pure and undiluted. Really, only one conclusion can be made from this mess of eclecticism: Goliathon mean serious business as they intend to remedy Indianapolis' lack of a standout rock group.