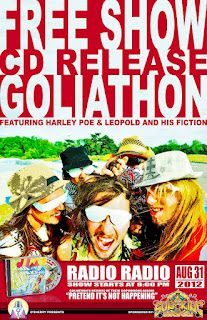 At what felt like the last second, a buddy and I piled into his 2006 Ford F-150 after a long day of classes and hurried our way to Fountain Square in Indianapolis. Following an hour drive and a quick bite at Jimmy Johns, we reached our final destination, Radio Radio, a bar known for its sublime mash-up of music and atmosphere--surely one of the premier places the city has to offer for lesser known bands looking to move up one ring on the musical ladder. We knew the night could go in one of two ways: either a painfully boring threehour set or we would be swept off our feet by a handful of obscure bands we had only heard of in passing. Good thing the show was free.

As my friend removed the keys from his gas-guzzling beast, we nodded to each other in agreement that the night was going to be fantastic. We had only seen the black-tinted, abyss-like windows outside the bar and a colorful sign positioned directly above two thick wooden doors, but the allure of the venue was enough to push collective excitement through the roof. The only requirement was a brief flash of our IDs, confirming we were of legal drinking age, which we did without hesitation.

Cozy and dark, Radio Radio turned out to be the perfect place to host a small concert--busy and bustling with people clamoring for their much beloved alcohol and a band or two on the side to make the night even better. Armed with glowstick bracelets, courtesy of the woman at the door, and an assortment of merch from the sales booth in hand, we found a table near middle of the floor and anxiously took our seats. It would be an hour before the first band, Harley Poe, would unleash their brand of zombified rockabilly horror rock on restless concert goers. Nevertheless, we were pumped and eyed our newly purchased loot with admiration.

9:00 PM brought the zombie rockers to the stage, complete with an actual upright bass (not a bass guitar!) a banjo, and a plethora of funny lyrics. Based on sampling before the concert, I knew Harley Poe's main theme was zombies, but little did I realize the band's cult following as listeners rushed to the front of the room, mouthing every lyric and mimicking every move Joe Whiteford made as he thrilled, excited, and chilled the audience through a combination of humor and terror. Most impressive, however, was his ability to play guitar, sing, and puff away on a harmonica via some sort of neck stand during vocal breaks. I can't say I've ever seen anything like it.

If one criticism exists toward Harley Poe, it's that most of their material is a never-ending loop revolving around the same ideas both musically and lyrically. Two or three songs yielded a joint agreement that, while fun, the act is definitely a novelty to be enjoyed in a less serious setting and nothing musically-engaging like the following two acts. Would I see Harley Poe again? That's hard to gauge, but I'm definitely a fan of zombified tongue-in-cheek humor.

Blissfully unaware that the next act would be our favorite of the night, Leopold and his Fiction simultaneously blew my friend and I away and resulted in a high still yet to wear off. The band hit the stage after a 15-minute gear change, and from the first smack of the snare drum to the brilliantly juicy guitar licks, we knew we were going to dig the act. Let's put this into perspective: the main reason we attended the concert was to see Goliathon and to join the local Indy music scene. The rumors were true; Goliathon were a delicious blend of seventies pomp, progressive rock, and proto-heavy metal tendencies. But to have a trio from San Francisco match, if not better, the main act, well, we got everything we asked for and more.

Full of energy, Leopold and his Fiction's set rendered the other two bands comparatively lifeless and significantly less involving. Frontman Daniel James proved to be the anchor of the band's music, whisping away each lyric with delicacy when needed, all while plucking away glowing guitar solos during instrumental sections. Not to be forgotten, the rest of the band were all too essential to the mood, with thumping, thunderous bass lines and fluid drumming rounding out the package. "Waves (Golden)" settled as our favorite of the night thanks to the song's growing climax and soulful chorus.

Climactic as the show was, we knew Leopold and his Fiction were getting even hotter when James ripped his shirt off and pummeled through a round of spirited guitar solos. Filled to the brim with vigor and drive, the band were literally on fire the second half of the show and then it hit me: I wasn't going to leave the concert without an album or two. Awe set in, and I knew purchasing music from the act was a necessity, rather than a want. I'm not afraid to admit I took my attention away from Goliathon's set for a few moments just to greet Daniel James at the merch booth and grab myself a superb 7" vinyl and a CD containing Leopold and his Fiction's latest work.

That said, Goliathon were up next and Radio Radio overflowed with fans of all ages. Clearly, the act were something special to the Indy scene, and we damn well hoped they would be since we made the hour drive. As the crowd pushed closer to the front, the hype for Goliathon continued to accrue as fog erupted from the stage, while backed by a curious choice of a SNES Super Mario track. Although the band burst onto stage a few moments later and opened with an eerie brew of dual guitar harmonies, what most excited us was the Korg synth placed at the head of the stage and a beautifully golden-shone saxophone, which added another dimension to the band's music.

Five members deep, Goliathon brought the goods and partied with an eclectic take on a dying breed of rock. While still familiarizing myself with the band's discography, the show was primarily based around the release of their album, Pretend it's Not Happening--a great choice because the record is upbeat and an excellent addition to Indianapolis' rock scene. What surprised me most was Goliathon's ability to keep their composure among a drunken crowd. For what the band lacked in stage presence, they made up for with excellent musicianship. But unlike Leopold and his Fiction, who had relative freedom with three members, a small stage was not suited to a larger band like Goliathon. Moving around was tough.

On every level, the night was a success. We discovered a bitchin' new band, Goliathon lived up to musical expectations, and Harley Poe provided a laugh or two. Small acts best take note on where to play next because Radio Radio is certainly one of the hotpots to grab a beer or two, relax, and enjoy a few tunes. When Leopold and his Fiction come through town again, you can bet I'll be there. That's how much they blew me away. Goliathon better be watching out for me, too.