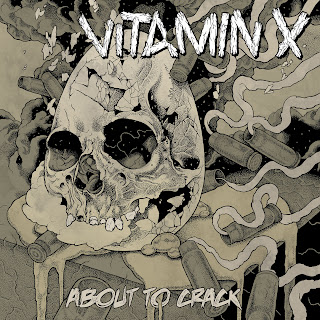 Drenched in a sweaty musical bliss, nearly every song on Vitamin X's latest offering, About to Crack, is backed by a moving, grooving bass line, not unlike what an inebriated Lemmy Kilmister might scribble down for use during a Motörhead set. As it turns out, bluesy solo guitaring proves to be one of the more enjoyable qualities of the record and points at "Fast" Eddie Clark, another, though departed, Motörhead veteran. Much like the Brits before them, Vitamin X gather the best qualities of metal and punk and create and accessible and wonderfully coherent product--a rarity for the former.

Instead of aiming for the average album's 30-minute run-time, Vitamin X take a complete u-turn and clock in at a blindingly fast 18 minutes. To put things into perspective, rockers can listen to this record twice in the span one might spin a "regular" album. Whereas the average record takes double the time to sink in, About to Crack is extremely easy to absorb after only two spins, but at a slight cost: many of the songs fuse together and become indistinguishable from one another until listeners sit down and analyze what has entered one ear and left the other.

I always take precaution when ordering from a new record label because the practice is just, well, good practice. Even as I say that, Northern Horde Record's "going-out-of-business" sale was too appealing to pass up because each CD was priced at a measly two dollars--effectively pocket change in an industry that marks up a simple disk astronomically.

How any company can make a profit from that price is beyond me. Isn't the goal to reduce prices during a liquidation sale, but still turn a slight profit? Instead of doing my research, I stupidly jumped the gun and drooled over the fact that four CDs could be had for eight bucks. Heck, I could even buy one or two for a friend of mine (or so I thought...)! My hopes were shattered, sadly, when my order didn't arrive for two months. Something was clearly very wrong, especially because no one at the company cared to reply to emails until the orders were out of their hands. 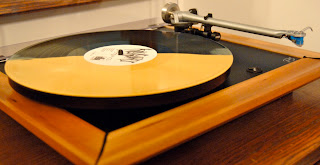 Well, I messed up big time. I forgot my vinyl feature last Friday. Now seems like as good a time as any to give a quick sneak peak at what recently crawled into my vinyl collection, a beautifully crafted two-tone record, courtesy of our Norwegian friends, Diskord. Shipping from Norway was brisker than expected, thanks to a professionally run label (No Posers Please!), and the album arrived in my hands at a sliver under two weeks. Needless to say, I was impressed, but I was also psyched that the guys were generous enough to give the record's slipcase a marvelous graffiti bath at my request.