The early eighties saw Asia impressing the world with their hooky and blatantly poppy brand of rock, standing as a testament to the quality of the members' other projects. The act was always known as something of a super group--where King Crimson, Yes, and Emerson, Lake, & Palmer members called the band home--but their music was made to appeal to the masses. The group's debut was essentially nothing more than a slightly progressive take on the trendy synth sounds at the time and lacked the power of truly sprawling epic like "21st Century Schizoid Man." Nevertheless, the debut did exceptionally well, claiming title as the best selling album of 1982, and Asia eventually watched their opus climb to a staggering platinum title (4x!) virtually 13 years later.


But despite Asia's choice to shape XXX with fluid piano intros that build into explosive, layered choruses, the album isn't all that consistent. The record's first single, "Face on the Bridge," follows the formula and sets the bar high, borrowing rhythmic-inspiration from modern bands like Coldplay. "Tomorrow the World," "No Religion," "Al Gatto Nero," and "Judas" jump on the bandwagon and carefully quality-match the single, but the remaining aren't as fortunate. Even so, the only oven fodder found among XXX's track listing is "Faithful," an absolutely painful, ballad-like cheesefest that recalls the earliest part of eighties. Nearly every track on the record remembers the decade, but "Faithful" makes the whole album entirely worthy of being chucked off a skyscraper.

Next in the track listing, "Bury Me in Willow" certainly has potential until it hits the chorus line. Having no business singing in a higher register, Wetton's vocals are strained, although the real problem is the tired-sounding melody. "I Know How You Feel" is catchy enough, but missing oomph and the vicious attack of a distorted electric guitar. Asia have never been overly heavy, as that would alienate the band their fan base, but the track desperately needs a support behind the pulsing synth line. Likewise, "Reno (Silver and Gold)" and "Ghost of a Chance" suffer from the same problem, even as ballads. They're missing something. 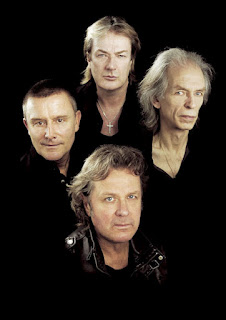 Other complaints are trivial at best, but nevertheless enough to hinder enjoyment of the record. A crying outrage for former progsters such as these, the guitar solos are sloppily played, not to mention short on punch. Where is the power? Where is the competent axe slinging found nearly 30 years ago? Adding more fuel to the fire, the Italian lyrics sprinkled throughout the album's 55 minutes are like cheddar-encrusted kamikazes. It's like pouring gasoline on yourself, lighting a match, and thinking you have a great time on your hands. In some sort of demented mindset the idea may seem appealing, but once the deed is done, you realize you're on thin ice. It's just cheesy.

As cream of the crop for this type of music, Asia shouldn't be stooping down to a product stewed in hot, melted cheese. Placing the album in the oven for a few more months--even a year--would surely have proved beneficial because the message listeners are getting are the last words of a dying band. Is it time to throw in the towel? Well, only Asia can answer that, but a bit of advice can be offered: don't tarnish your name like another act has continued to do for over 20 years--Queensrÿche, we’re looking at you.