Taken straight from my personal vinyl collection, Havok's Time is Up is an uncommon piece limited to 500 units worldwide. More often than not, colored records are pressed for novelty's sake, and while they tend to sell out faster than the standard black, it isn't without a cost--the sound quality suffers.

Although colored vinyl is an interesting alternative to black, unwanted surface noise will always be the number one reason I try to avoid infatuation with eye candy all together. For some, buying vinyl is a nostalgic experience and one step further away from the mainstream who consume swaths of digital files daily. For others, vinyl's selling point is the warm, bubbling sound (best found with black vinyl) and a reason to keep the archaic, yet wonderfully unique format around. For me, it's a combination of both.

The early eighties saw Asia impressing the world with their hooky and blatantly poppy brand of rock, standing as a testament to the quality of the members' other projects. The act was always known as something of a super group--where King Crimson, Yes, and Emerson, Lake, & Palmer members called the band home--but their music was made to appeal to the masses. The group's debut was essentially nothing more than a slightly progressive take on the trendy synth sounds at the time and lacked the power of truly sprawling epic like "21st Century Schizoid Man." Nevertheless, the debut did exceptionally well, claiming title as the best selling album of 1982, and Asia eventually watched their opus climb to a staggering platinum title (4x!) virtually 13 years later.

...and this is the news I've been waiting for. My favorite Slovenian metal band is moving up in the world! 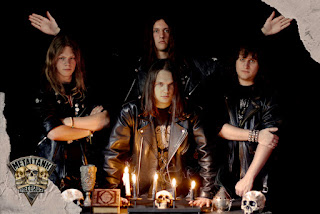 From the press release:

The Slovenian occult heavy metal act, Vigilance, inked a deal with Metal Tank Records that will release their upcoming album. The successor of Steeds of Time from 2011 will crush everything in front of it with its excellent mixture of genuine traditional speed heavy metal filled with profound devotion for primordial and ritualistic occultism. For more information consult the official Metal Tank Records website at www.metaltankrecords.com.

The band comments: "We are thrilled to announce that we are returning to Zalokar Studios. The time is at hand to record the successor of our debut album Steeds of Time. We have been working harder than ever before so you can expect nothing but fast, dark, and untamed heavy metal!" 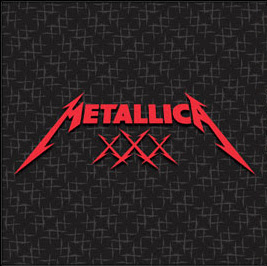 Released only with a special issue of Metal Hammer, The First 30 Years is a dainty piece and surely one of the thinnest 7" I've had the pleasure of holding in my hands. Thanks a blogger friend, gogmagogical, who always seems to find the jewels lurking in the wild, I tore into my local Barnes & Noble earlier today, expecting the one of a kind magazine + vinyl match-up to be scarce or, at the very least, sold out. To my amazement, the bookstore had five or six copies ripe for the taking and presumably a good deal at $14.99.

The First 30 Years features two live tracks; the first a cover of Anti-Nowhere League's "So What." The band's long-time vocalist, Animal, treats the track as an opportunity to bark into the microphone and claim what was originally his, while Metallica back him with the same approach they have taken to music since 1991: simple, yet effective, chord progressions that make up the majority of their post-nineties material. Sadly, Kirk is still very much the same, though, and continues down the path of messy, wah-infested hammer-ons and pull-offs. 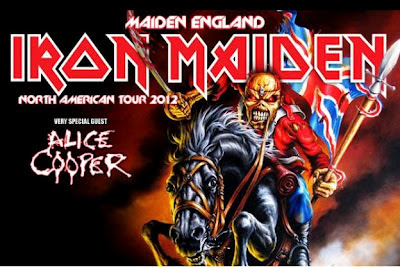 For the first time in seven years Iron Maiden returned to Indianapolis. On this occasion, they weren't part of a half-baked festival named Ozzfest but instead on a headlining tour with an amazing support: Alice Cooper. The already deliciously sweet bill got even more impressive. I didn't get one legend. I got two.

The last time Maiden visited Indy was all the way back in 2005, which, coincidentally, was my first live music experience. As far as the whole first concert deal goes, that one couldn't have been better. I somehow squirmed my 14-year-old body to the front of the venue and found myself among adults--other kids oddly out of sight. But now that I think about it, Maiden weren't as monstrously popular back then. In fact, their following burst to immense proportions in subsequent years all the way up to 2012's Maiden England tour.

Don't get me wrong; Maiden were always popular for a metal band, especially in the eighties when they created controversy for being Satan's spawn with their "The Number of the Beast" single. As the ninties rolled around, however, the majority of rocker heroes hit a dead end in both appeal and creativity and simply lacked the musical "resources" to dig themselves out, resulting in a style change. Eddie and the boys regained their momentum circa 2000 with the release of Brave New World and began to climb the ladder to glory in and outside of the metal community. That said, the Iron Maiden of today don't fit the nineties description. They have, in reality, ripened as a live band and exceed my expectations every time I get a chance to see them. And this concert increased that magical number to five times!

I'm not fan of artists that create graphic shock value with lyrics and album art. In fact, I hate them. Attempts to be disgusting just for the sake of being disgusting is a poor excuse for music, and I want to trash every record that drifts close a similar mindset one-by-one (with a few exceptions, of course.). Take, for example, the average goregrind band. More often than not, they can't adequately play their instruments, nor can they be taken seriously.

Why am I going on this rant? Because Placentophagia, a band I want to enjoy, narrowly avoid falling into the trap, if for only one reason--their music isn't as ludicrous as what their peers are recording. Placentophagia have the vile lyrics. They have the rotten cover art. They even have the dreadful song titles. The Ontarians seemingly fit the formula to a T, nail on the head and all. The band's first EP provides the much needed--or detested--thrill for this sort of style, but they back their music with fairly decent musicianship and a clear understanding of the building blocks that make up death metal. 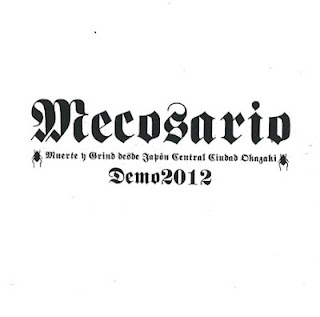 Like any other form of extreme music, overlapping and interchanging various elements is part of the composing process. Historically, death metal and grindcore have had a relationship with one another, while bands of both styles played shows together without much fuss from fans.

Mecosario, a grindcore band from Japan, would have no problem performing alongside our metal brethren. In fact, they play rather standard punk-tinged music, but what differentiates them from other acts is their focus on Mexican themes and Spanish lyrics. Yes, you read that correctly; a band from Japan centers on something completely opposite of their own culture, which is certainly absurd, but the concept works.

2012 has been a frantic year for the band. One half of Mecosario's dual vocal attack, Tonoko, hastily departed from the group, leaving Mecosario in a bind to find a replacement before upcoming shows. Luckily, after what seemed like a week, Aiko stepped to fill big shoes, but she does not make an appearance on the band's first demo. The band's only existing work, Demo 2012, features the original line-up, pictured below. 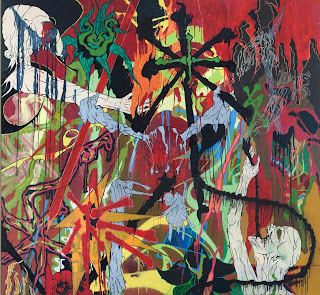 You would have to live under a rock to be unaware that the last couple of years have been positively fruitful for death metal, with both newer and older bands churning out "to-be" classics and records reminiscent of the glory days. Diskord's Dystopics is significantly different than what has manifested itself in the scene as of late, mainly because the group cast an avant-garde approach over what listeners expect when envisioning death metal. Tempo changes, unpredictable song structuring, and dissonant, moody riffs mixed with the usual spastic guitar textures encapsulate Dystopics, sounding like nothing else in the subgenre; Diskord really have carved a unique place for themselves in the death metal world, which is an accomplishment for a stagnant (but excellent) form of music.