Metal Round-Up: Stuff that Doesn't Fit into a Full Post 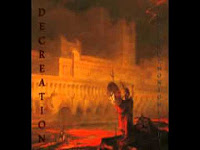 Aside from a "different" band name, Decreation does nothing to separate their music from the worldwide assortment of melodic death metal bands. Subpar clean vocals, tired and chugged guitar riffs, and uninspired melodies keep the group's first demo (The Pandemonium Light) from being enjoyable and, most importantly, memorable. Ideally, a few spins should give a listener an overall impression of a band's music; however, I still feel empty when thinking back on what came through my headphones. It doesn't help that the production is an exemplary nod to fakeness and lifelessness. Normally, I would do a full review on a demo like this, but I can't bring myself to listen to it anymore. Avoid at all costs, unless you like being bored to tears.

Canadian death metallers Placentophagia are touring in preparation for the release of their first EP, Feast on Thyself, which should be available this July. Honestly, I find it hard to take metal bands that focus on over the top gore and other bodily issues seriously, but I'm not making any judgements until I can get a hold of the EP. For now, I have the lead single called "Flesh Fetish" in hand (given out free at shows), and the song doesn't sound too bad except for a production that needs a bit of retooling. I'm guessing the release will hold rather predictable death metal, albeit with some nasty, lip-licking lyrics that should satisfy those into medical oddities. 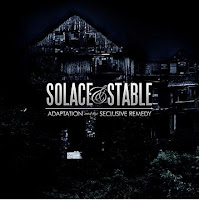 Like Placentophagia, proggy metalcore act Solace and Stable is gearing up for the release of their second full-length record entitled The Systematic Erosion of Integrity. The band sent three tracks my way, the remaining still going through rigorous stages of recording and production. Between the Buried and Me are clearly a hefty influence on the band's overall sound, which isn't a bad thing, but I'd like to hear some of their own personality jump the hurdle and join the fun. I'm not expecting any surprises from their second album relative to what they provided me, but look for a review in the future.

Check back later for a possible download link to the three tracks. I want to confirm that it's okay to post them up.

Edit: Download and listen to the three tracks here.