The Metal Advisor Interviews Espen and Torstein of Chton

As most of you probably remember, I took a shot at interviewing Cleaver earlier this year, and they turned out to be some of the funniest guys I've had a chance to talk with. Funnily enough, the death metal band, Chton, share close ties with Cleaver and are, again, great musicians and composers that bring something refreshing to the Norwegian metal scene. Let's get acquainted with them.

So let’s get down to business early in this interview—did Chton ever find a label willing to release the Screaming for Death split with Cleaver on vinyl? As we all know, I’d love to get my hands on that.

The intention behind the split was to get our name out there before the album's release, which was the intention for Cleaver as well, and to give people a taste of the coming venom. So that isn't something we actively sought to get done, at least not yet. I think all we did was post a Twat on Twitter asking if anyone knew of some underground label that could just print it and push it. It is, however, officially released on Morningstar Music and distributed via loads of download and/or streaming platforms like Spotify, iTunes, 7digital, Amazon, WiMP, etc.

Still, I would really like to see that split on vinyl myself, so it isn't out of the question. It's more that we've decided to use our time on the preparing the actual music and doing some promo for now since we've been swamped with work to get The Devil Builds ready to be unleashed.

That said, what is your opinion on the modern day music industry? I certainly sympathize with you and Cleaver because I hate to see amazing bands struggle to find a label willing to release excellent music.

I can only speak for myself, but I don't really feel like I take that much part in the music industry. But the again, this "industry" is flooded with bands who sound just like each other and seem to follow a template for song writing, instead of trying to create some momentum of their own.

This way REAL talent or skills sometimes gets overlooked, and there are many great bands out there who most likely never will get due credit because they don't participate in current trends. Even in metal, maybe even especially in metal when I think about it... But that is what one gets for swimming against the current, mhm?

That said, metal music will always have real fanatics, so some appreciation is bound to show up if you're dedicated to your craft. One nod from someone who gets it is worth more than a hundred from someone who doesn't own Seven Churches on vinyl, to quote Lock Up!

Was playing at Inferno Festival as fantastic as it sounded? You shared stage with some big names!

Playing the Inferno Festival was a blast for sure! And sharing stage with local metal comrades Manifest and the great band Hellish Outcast, who also features Thebon from our friends Keep of Kalessin on vocals was, to say the least, inspiring. The festival also featured some great bands this year, like Autopsy, Triptychon, 1349, and many more....

The last couple of years we barely touched the stage, but after hitting the stage at the Inferno Festival, we're more than ready to get out there again and gorge ourselves on more live blood! We have lots of plans, and if anyone wants to see us live shoot us an email via www.chton.com.

Care to provide a few inside details about the upcoming album, The Devil Builds (your second full-length)?

If I did, you would have to burn the paper afterwards (or blow up your computer, I guess).

Inside information, eh? I guess you mean info apart from stuff like this (which I'm going to include anyway):

The Devil Builds was recorded and produced at Morningstar Studio with Arnt Obsidian Grønbech (Keep of Kalessin, Satyricon) at the helm. The album was mixed by Stamos Koliousis (Djerv, Mencea) at 210 Studio in Berlin, known for earlier work with, among others, Nattefrost, Gehenna, and Vreid. The album will feature 10 songs, and some of the songs set to appear on The Devil Builds are "Faustian Resolve,""Gods of the Flesh," and "Babalon and the Beast Conjoined."

With that out of the way, the album was actually recorded more than two years ago, but those who wait for Hell shall certainly receive! The actual recordings went quite swift. I think both the drums and vocals took less than two days respectively. I guess we get what Glen Benton meant when he said that sometimes it feels like it's not himself steering his pen when writing lyrics.

Satan knows what we're channeling, though. As long as we don't tune ourselves into a damn radio station with Justin Bieber or some shit on it, we'll be fine.

Will the material differ from what’s seen on the split?

The featured version of "Death Awaits" on Screaming For Death, although slightly different from the original (which is included on The Devil Builds) is more or less representative of the album, I guess...

That said, the album features both heavier, darker, and faster tracks than Death Awaits, so those who enjoyed our contribution to the split should NOT miss out on our album.

But we're not one of those bands who forgets what style we play in the middle of a song, going all mellow and proggy as the vocalist suddenly thinks he's recording an audio book or something. So fans of brutal and dark death metal with catchy hooks, demonic riffs, and never ending pummeling double bass drums should give us a listen!

How did Chton approach the writing process for the The Devil Builds? Or rather, does everyone in the band actively participate in composing new tunes?

Since we function so damn well as a unit, not something that every band out there can say, everyone is actively participating in the creative process.

Although, Øyvind and Torstein are the ones who provide the riffs, which they bring to the rehearsal space, we all get together and flesh it out until it becomes a fully dysfunctional monster--also known as a song. Often Espen and Øyvind first meet up and effectively put together a new song before Torstein enters and picks it all apart. All the better so the monster becomes even more lethal and enduring. Then Ola spits his blasphemic vomit all over it, and the Chtonian monster takes on a life of its own, taking a stab at any one who's near.

Now that we’ve got that out of the way, how did Chton become reality? Honestly, your name alone is what caught my attention the first time around. It’s unique and easy to remember.

The name Chton came in 1999, but the band more or less found its form from two earlier bands. Øyvind and our first bass player, Chris (now in Cleaver), came from a more black metal-inspired garage band that got drunk and played old Mayhem covers and stuff, while Torstein and our first drummer, Vidar, came from a thrash band called Frost. When half of Frost chose to relocate to Oslo from Trondheim, Torstein and Vidar chose to stay behind. Frost eventually changed their name, by the way, and are now called Imbalance. Check them out - great aggressive old-school thrash!

Well, anyway... that's the first few steps down the ladder for Chton.

Why did Chton members decide to form Cleaver? Simply another outlet to express musical interests?

Øyvind churns out riffs like he's taking a piss, so we had to make sure they don't get spilled all over, but instead used to rot the right crops. Espen and Øyvind used to meet an hour earlier or so before band practice to warm up and work on new songs. A lot of the material ended up sounding like something that wouldn't fit into the coffin of Chton, but the songs were too damn cool to be scrapped, so instead formed Cleaver. The band name was actually something Torstein came up with years ago, so what better use, eh? It's all one big happy family. Charles Manson would be proud.

As I have not had an opportunity to hear the first Chton demos, what were the band’s early days like?

The music wasn't very different from today, I would say. It's more that we've become better on our instruments than anything else. The music has had an organic development, and we still follow the same visions as we did starting the band. We wanted to create death metal that was dark and brutal. We all like "hooks" that get our heads banging, but we're not that into a lot of the melodic stuff that has infested this genre.

Who or what are your influences? For me, your work on the split gives off a nice old school death metal vibe.

Every member of the band prefers their metal like they prefer their women: dark and brutal. That said, we don't really limit our listening (as opposed to our women) to specific genres, but I'm positive that all of us can side on the fact that bands like Bathory, Morbid Angel, Slayer, Immolation, and Venom are among the best in this world.

I understand what you mean by old school death metal vibe, but that's not something we actively try to bring forth. It just so happens that we all play our own favorite music. Not all inspiration necessarily originates from music, though. Sometimes it may as well be movies, books, video games, or drunkenness and general depravity.

Any last words, my metal comrades?

Be sure to check out our coming album The Devil Builds this autumn.

While you're waiting check out our split with Cleaver, Screaming For Death, available on Spotify, iTunes, Amazon, ad nauseum, and make sure to follow us on Twitter and Facebook. 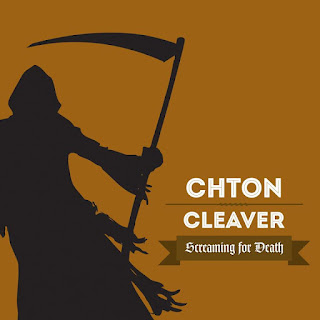