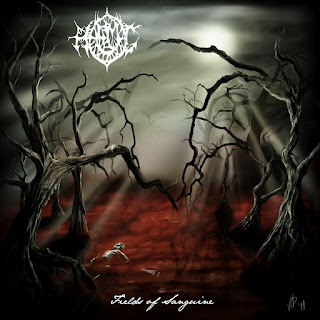 What sets Haemic apart from the rest of the black metal pack is not their sound, but their founding story. Crazy as it might seem, the members have never met, yet alone stepped into the same room to practice or plan their material. The quartet recorded Fields of Sanguine across the globe, collaborating only through cyberspace--normally, bands like this are like a needle in a haystack and beyond any type of success because their hopes and dreams fall apart. But as a group of young, aspiring musicians, Haemic attempt to battle that stereotype and succeeds.

Black metal, shclmack metal--low-fi production values and recording quality is pushed to the curb, favoring a meatier, thicker sound usually found in polished productions. Atypical for traditional black metal and characteristic of the symphonic variety, Haemic utilize a respectable mixing and mastering on their debut with little to no budget in hand, but the job isn't perfect because the drum machine sounds inorganic. In spite of that, the overall production puts the band on the world map as a serious force to be reckoned with, and certainly one of the few from Taiwan (Haemic is based in the country) that have the guts to step out of the nation's borders.

Those borders don't go far, however, because once you've heard one song off Fields of Sanguine, you have a decent feel for what the rest of the album will sound like. Although a variety of influences from various subgenres pop up every once in a while, the bulk of the record rests in symphonic black metal. Ray Heberer's guitar playing is among the most focused and precise I've ever heard from a sixteen year old; sweeps, carefully thought out alternate picking, and intricate melodies flow across the duration of the album, but his skillful shredding often clashes with the drum machine's plastic aesthetic.

Sadly, there is little one can do to battle artificial sound--bar getting a real drummer--but if Haemic were to add a skin-basher, their music would have the potential to break out of the underground. 90% of the right ingredients are present regarding compositional and instrumental proficiency. They just need an extra push to realize their full potential.

In any case, as a debut record, Fields of Sanguine is very good and an upcoming star for Taiwanese metal. Aside from the much bigger Chthonic, the country lacks bands with international acclaim, but Haemic looks set to challenge the shortcoming by diligently spreading their debut album to blogs, listeners, and websites alike across the web. For now, Haemic's fan base can be described as cult status, although in the coming years I guesstimate we will see something big.